The drought in California unfortunately continues unabated. According to the most recent US Drought Monitor, 41.41% of the Golden State remains in exceptional drought. Much of the land area in the Central Valley and major population centers such as Los Angeles remain stuck in the exceptional drought category. Only about .15% of the state’s land area is drought free, about 245.5 square miles by my calculations. As you can see from the map below, the only area of the state that is designated as drought free is a rural area of southeastern San Bernardino County, generally between Lake Havasu and Parker, AZ. 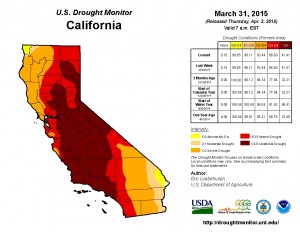 While the maps and figures are good illustrations of the drought, I believe that the toll the drought is taking on the people and wildlife that call California home is more important. In 2014, 17,000 farmers lost their jobs and the drought caused an estimated $2.2 billion in economic damages. Earlier this week, the spring snow survey showed no snow for the first time in the 75 years of early-April snow measurements. The critically-low snowpack caused Governor Brown to issue an Executive Order mandating water reductions across the state.

The severe drought is negatively affecting the wildlife in the state as well. In particular, surveys on the Delta Smelt population last month showed record low numbers in the wild, and caused some environmental groups to opine that the Delta Smelt is “near extinction.”

While the drought affects many fish and wildlife in California, perhaps no other species is at the forefront of the debate over water use and environmental regulation as the Delta Smelt. In this piece I will review what the population surveys found and the potential implications for both humans and other wildlife if the smelt population remains at record low numbers.

The Delta Smelt: On the Brink of Extinction?

Although the Delta Smelt is a finger-sized fish, it is a very important part of the ecosystem of the Bay Delta. Many scientists believe that the Delta Smelt’s population is a good indicator of the health of the Bay Delta’s ecosystem because the smelt is an important part of the food chain. Further, the issues of drought, water pumping and transfers, invasive species and water quality all tie back to the smelt. Unfortunately, the recent population surveys show astonishingly low numbers of Delta Smelt.

Each spring, the California Department of Fish and Wildlife conducts a survey to determine the Delta Smelt population. This year, the trawl survey found only six smelt – four females and two males. As a comparison, the chart below from Fish and Wildlife shows the annual surveys going back to the 1960s. While the species has been in decline for years, 2015 marks the second year in a row that the survey caught single-digit numbers of smelt. In the early 1970s, the surveys routinely captured over 1,000 smelt. Even as late as the early 2000s, surveyors captured hundreds of smelt in their yearly trawls.

Some dire predictions for the wild Delta Smelt population accompanied the news of the low fish counts. UC Davis Biologist Peter Moyle told the Delta Stewardship Council that we should “prepare for extinction of the Delta Smelt,” and that extinction may happen in the next few years. Moyle pointed out that most Delta Smelt have a one-year life cycle, 2 years at most. As such, large numbers of smelt have to breed successfully every year to sustain the population. With extremely low numbers, he concludes that it may be impossible for the species to last much longer in the wild. This prediction, if it comes true, could have significant ramifications on both humans and other wildlife in California.

The Delta Smelt and Water Supplies

As I wrote late last year, the pumping restrictions in the Delta tie directly to protecting the Delta Smelt and other endangered species. While court case after court case tried to determine whether fish or humans should have a higher priority for water resources in times of drought, water pumping and agriculture in the Central Valley have affected the fish populations in the Delta. (For information on the latest court action involving the Delta smelt, see “U.S. Supreme Court Denies Cert in Delta Smelt Case,” Journal of Water, February 2015.)The historical Delta looked much different from what the Delta looks like today. These maps show how much different the historical Delta looks from today’s geography. Early settlers in the Delta altered the flow of the maze of streams and marshes in the Delta to create some of the country’s most productive agriculture. The change in the Delta’s flows altered the habitat for fish such as the Delta Smelt and gave them less protective cover from the predators that feed on them.

Further, diversions affect the migratory patterns for the Delta Smelt and many of the salmon species that rely on the maze of rivers for spawning. An LA Times article points out that wild chinook salmon haven’t spawned naturally in the San Joaquin River since the Bureau of Reclamation built the Friant Dam in the 1940s. The real challenge we face is that millions of acres of agriculture and millions of people in the state also rely on this water supply. The decisions that we make on water allocations between human and environmental needs have serious ramifications on both sides. Unfortunately in this time of drought, both sides are feeling the effects. For the fish populations, the effects of the drought may reach beyond the dwindling smelt and salmon populations.

What effect does the Delta Smelt’s demise have on other Delta Species?

Scientists monitor the Delta Smelt population closely because they are a good indicator of the overall health of the Delta ecosystem. Why? The Delta Smelt are an important part of the food chain that many other species rely upon. If one link in the chain gets broken, other species’ populations may decline along with it. For example, salmon populations rely on Delta Smelt for food during the time the salmon live in the rivers and estuaries in the Delta. Dwindling Delta Smelt stocks give the salmon less food, pressuring the salmon populations. The effects on wildlife travels all the way up the food chain. In March KCET wrote an interesting article entitled “If Delta Salmon Die, They Could Take Orcas With Them.” The article argues that the orca population that lives just off of the San Francisco Bay area relies on the yearly salmon runs for their survival. The salmon populations are under pressure from the reduced amounts of Delta Smelt that the salmon rely upon for survival. Without the salmon, the orcas may not be able to adjust and find enough food to support the current population.

The bottom line is that while we can’t control the minimal rain and snowfall we have received over the last four years, the policies that we choose to pursue have implications. There are a host of reasons why the Delta Smelt and salmon populations have been in decline for years. Man-made dams and the pumping of water through the Delta play a part in the declines of fish species. Agricultural and environmental interests have fought a seemingly never-ending court battle over a simple question: in a time of drought, which uses should receive the limited supply of water? Moving forward, drought cycles will likely remain a part of our future. It is vital for our policymakers to understand that there are real consequences on both sides of the argument. Both human and wildlife populations rely on the same limited water supplies. We must find a balance between these two needs and accept the consequences that come from any decision we make on this difficult balancing act.