As the drought in California drags on, things that have not happened for decades or ever in some instances are starting to happen. For the first time since the Department of Water Resources (DWR) started conducting the spring snow surveys, the survey found no snow in April. Despite Governor Brown’s presence and a media frenzy surrounding the April survey, DWR cancelled the May survey because “Lack of snow at Phillips Station [the survey site in the Sierra Nevada Mountains] renders survey moot.” In early May, the State Water Resources Control Board warned that senior water rights are “likely to be curtailed later this year due to extreme dry conditions.” On May 20th, State Water Resources Control Board Engineer Kathy Mrowka confirmed at a hearing that the Board will send curtailment notices to senior water rights holders in the San Joaquin River Watershed by the end of the week. The State has not curtailed senior water rights since the 1970s.

Further, the State may curtail riparian rights in the Delta for the first time this summer. This week, Delta Watermaster Michael George outlined a proposal to encourage Delta farmers with riparian rights to cut their water usage by 25%. These farmers face a tough choice- if they voluntarily sign up for the program and fallow 25% of their land (or reduce water consumption by 25%), they will be immune to further cuts this summer. If the farmers do not voluntarily join the program, they still can try to plant 100% of their crops. However, the Delta Watermaster could potentially cut water supplies to those who do not comply well beyond the 25% voluntary reduction level. Either way, farmers have to choose whether to opt into the program by June 1st. According to the San Francisco Chronicle, a coalition of farmers in the Delta is working to finalize this deal with State officials.

California is not alone in dealing with the devastating issues that a prolonged drought can cause. Australia faced many of the same effects in the 1990s and early 2000s that California currently faces. Australia also has some similar features to California’s demographics and topography. According to Australia’s Millennium Drought: Impacts and Responses, as in California, much of Australia’s population lives on the coast. Further, agriculture in Australia uses approximately two thirds of the water supply. (Figures vary as to what percentage of California’s water supply agriculture uses, but the Department of Water Resources’ California Water Plan 2013 Update estimates that California agriculture uses approximately 41.2% of the state’s water supply.) Finally, Australia had a system of water rights that were originally designed to encourage settlement in the interior of the country, not to save water. However, the devastating droughts in the late 1990s caused widespread changes to Australia’s water rights system.

Although we are in the midst of a sustained drought in California, Australia experienced a much longer and arguably just as severe drought from 1997 to 2009. Areas of Southeast Australia (please see graphic below) saw some of the lowest rainfall totals on record during this time. Sound familiar? As such, farming activity in a few key areas in Australia fell dramatically. (Also sound familiar?) According to The Millennium Drought in Southeast Australia, rice and cotton production fell by an astonishing 99% and 84% between 2002 and 2009. The country had to make wholesale changes to its water rights system in response so that it could better respond to drought conditions in the future. 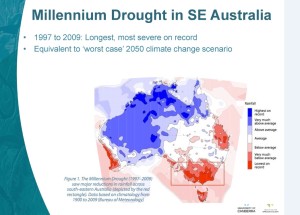 As the drought wore on in Australia, water rights trading slowly evolved as both water users and government agencies recognized the power of a more efficient system of trading. The National Water Commission oversees the country’s water rights, and the trading market primarily focuses on the Murray-Darling River Basin in Southeast Australia. There are a few important similarities and differences between the Australian system of rights and the system we have in California. Like California, Australia’s water rights allow owners to sell or lease entitlement to surface water in the basin. Owners can separate water rights from the land. Also, there is a hierarchy of rights as we have in California. As this Circle of Blue article points out, Australia has three levels of water rights, depending on the general reliability of each tier:

There are also a few important differences between the two water rights systems that may give some insight into the potential for California to implement a similar system. First, California has a dizzying array of federal, state and local water rights for both surface water and adjudicated groundwater rights. The systems in California do not allow a holder to trade rights directly between the State Water Project and Central Valley Project, for example. In contrast, the Southern Murray-Darling basin has a fully “connected system” in which water rights owners can trade across different river systems and state boundaries. Further, Australia has a strict metering system to account for every drop of water within the basin. California does not. For groundwater in unadjudicated basins, there are currently no regulations as to how much groundwater a user can pump (though the groundwater legislation passed last year slowly will change this). As the case of California’s “mysteriously missing water in the Delta” showed us earlier this spring, farmers oftentimes self-report water usage and have little oversight as to how much water they divert.

While Australia has a good model system for how to establish a revamped system of water rights in California, I am not sure from a practical standpoint if a system such as Australia could ever find enough political support in California. First off, water in general is a very politically charged and sensitive issue in the state. Often different groups are diametrically opposed to certain policy proposals. I am not sure that legislators could ever get the myriad federal, state and local governing agencies that oversee our water rights system to agree to “centralize” the water rights system like they have in Australia to trade rights between rivers and basins. The rights system in California is just too fragmented. Further, Australia’s water system relies on accurate reporting and metering. California is having a hard time determining who is using how much water, and farmers often push back on regulators asking for usage information. In reference to the water “mysteriously missing from the Delta” that I mentioned earlier, Department of Water Resources spokeswoman Nancy Vogel said, “We don’t know if there are illegal diversions going on at this time. Right now, a large information gap exists.”

The bottom line is that it is helpful to compare California’s water rights system to Australia’s and make conjectures as to whether a similar system would work in California. However, from a political and practical standpoint, I believe that there are some major hurdles to ever creating a similar system in the Golden State.

2 thoughts on “Australia’s Water Rights System – A Look of Things to come in the State of California post-Drought?”