What a difference a year makes. In Texas and Oklahoma, a year can almost put an end to the drought that has ravaged those states for years. One year ago, 90% of Texas was experiencing some level of drought, and exceptional drought covered approximately 25% of the state according to the US Drought Monitor. Oklahoma also experienced a similar turnaround. One year ago, some level of drought covered 94% of Oklahoma and exceptional drought covered 26.47% of the Sooner State. However, the rain deluge and the devastating floods that accompanied the rain have almost completely alleviated the drought conditions in both states. 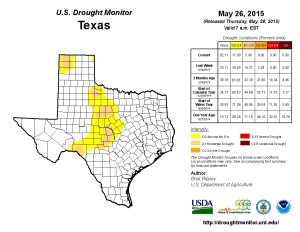 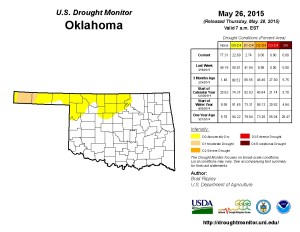 Some scientists are hoping that the drought-busting rains in the nation’s heartland and the first indications of an el Niño forming in the Pacific Ocean will be harbingers of drought relief for California and parts of the western United States. However, as we are seeing in Oklahoma and Texas, a deluge of rain in such a short period of time also brings negative effects. In this piece, I will discuss the drought relief in Texas and Oklahoma, the negative effects that the deluge of rain is causing, and the potential for California to see a similar outcome this winter.

The Drought in Texas and Oklahoma – Less publicized, but just as severe as California’s

It seems almost weekly that we hear a new story about California’s drought and how it is affecting everything from slightly increased food prices to debates over whether celebrities’ wasteful habits are making the drought worse. The drought in Texas and Oklahoma has gotten a fraction of the media attention, but it has been just as severe. The drought in this part of the US began in the summer of 2010, and has been present with varying levels of intensity ever since. The drought reached its peak in the summer of 2011. In late August 2011, 70% of Oklahoma and an astounding 80% of Texas faced exceptional drought conditions, the most severe US Drought Monitor category.

Oklahoma farmers faced similar economic consequences from the drought’s grip. According to a study from the University of Oklahoma, the drought in 2011-2012 caused $2 billion in economic damages in Oklahoma. The Texas Comptroller estimates the agricultural losses at $5 billion for the same period of time. In Oklahoma in particular, farmers are at the mercy of Mother Nature because most croplands are not irrigated. As such, the lack of rain caused widespread land fallowing. Also, cattle ranchers in both Oklahoma and Texas thinned their herds substantially since the start of the drought. According to the US Department of Agriculture, Texas had 11,100,000 cattle at the beginning of 2014, down from 13,600,000 in 2010. Increased feed prices as well as a lack of water for the herds caused ranchers to sell down their herds. The 2014 cattle inventory represented a 14 year low.

However, droughts do not last forever, and in the last month, a series of storms has rolled through the central United States bringing a deluge of rain to Oklahoma and Texas. The storms have caused widespread damage and unfortunately has also left 22 people dead. The rains provided an incredibly quick turnaround for the drought parched areas. Just three months ago, drought covered 61.65% of the State of Texas. Now, drought covers just 17.89%. In April 2011, Texas Governor Rick Perry issued a proclamation proclaiming 3 days as Days of Prayer for Rain in the State of Texas. Now the state has more floodwater than it can handle.

The negative effects of the deluge of rain

The torrential downpours have brought some much needed rain to the area, recharging reservoirs and aquifers in the process. One would assume that for agriculture, a lot of rain would be preferable to no rain. However, the downpours have caused just as many problems for farmers in Texas as the drought. Mike Barnett, spokesman for the Texas Farm Bureau said, “I think it is not all farmers, but some farmers are looking at a total loss for this year. You have some situations where farmers had a bumper crop, and now they have next to nothing for the season.” For example, Texas ranks fourth in the United States for winter wheat production, behind only Kansas, Oklahoma (where the floods are also affecting this crop) and Washington State. This year’s crop in Texas is still on the ground in many areas, and the rainfall is causing what could have been a substantial crop to wither and rot.

The destroyed crops cause a ripple effect beyond the farmers’ lost wages. The lower quality grain due to the flooding may not be suitable for human consumption, so it may fetch a lower price at market. Also, harvesting crews will have limited time in between rainy days to harvest, causing crews to rush through the harvest when they can. The ripple effect may cause similar economic losses in the agriculture space as in the drought years.

A preview of things to come in California?

Scientists and water policymakers are hopeful that a drought busting deluge of rain will hit California this winter. While the chance for a soaking is not unprecedented, meteorologists watching for signs of rain in California have been disappointed for the last few winters. In both 2012 and 2014, scientists predicted a higher chance of an el Nino event forming in the Western Pacific to bring drought relief to parched California. Both were “a bust.” Last winter, a series of “Pineapple Express” storms brought significant rains to Northern California and Oregon. Unfortunately, these storms were warm weather storms and did not bring large amounts of snow accumulation to the Sierra Nevada Mountains. As such, the water that fell moved rapidly off of the land (unlike snow which melts slowly and recharges rivers and aquifers over time).

Further, those praying for a deluge of rain should be careful what they wish for. During the 1997-1998 el Nino, California spent $165 million in FEMA funds to prepare for the heavy rains. Even still, the storms caused an estimated $1.1 billion in economic damages in California alone. California and any area that drought is affecting would surely welcome rains. However, intense storms such as the ones that have ravaged Texas and Oklahoma last month and California in 1997-1998 can cause widespread damage. Let’s hope that next winter brings California plentiful rains without the damage that flooding and major storms can cause.