The drought in the western United States is currently at its worst across much of California and Nevada, where exceptional drought covers 46.73% and 18.38% of each state respectively according to the US Drought Monitor. Parts of Utah, Idaho and Oregon are also experiencing extreme drought. In Oregon’s case, the drought unfortunately is only getting worse. At the start of the calendar year, 49.29% of the state was under severe drought conditions or worse. Currently, 68.48% of the state is under these conditions. The drought has prompted Oregon Governor Kate Brown to declare drought emergencies in 15 counties. The drought declaration gives the affected counties eligibility to receive Federal funding and assistance to combat the lingering effects of the drought. In relation to the drought declaration she said, “The majority of our state is parched due to the warm winter and lack of snow. As we move into summer, many areas of the state are going to dry out quickly, likely leading to a difficult fire season as well as water shortages.” 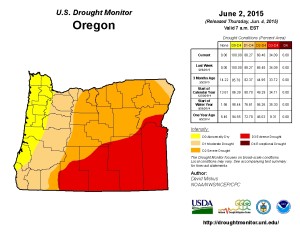 As officials across Oregon grapple with the drought, pundits are looking for both culprits and solutions. One culprit that some groups have identified as a water waster in both Oregon and California in particular is the bottled water industry. Particularly, opponents to the industry are taking aim at both the Nestle Company’s current water bottling operations in California as well as a new proposed facility in Oregon. They argue that bottling water from aquifers that the drought is affecting is irresponsible and that the operations often have little environmental oversight or accountability on how much water they use. But is this a fair assessment of the industry, and are they really operating without governmental oversight? I will address both of these issues in this piece.

Bottled Water: A hot climate in the west is causing hot debate over the industry

Interestingly in Oregon, a lack of water is not the main cause for the drought. According to NOAA, some areas of Oregon have received close to average or above average rainfall totals so far this year. The challenge is that near record winter temperatures caused more precipitation than normal to fall as rain rather than snow. Snow melts slowly and recharges rivers and aquifers more evenly over time. The precipitation that falls as rain runs off of the land more quickly than snow and has left Oregon mired in drought conditions.

In the midst of the drought, bottled water companies continue to use water supplies from areas experiencing drought and to look for new sources of water. In Oregon, Nestle Waters North America is looking to create a bottling plant in the small town of Cascade Locks to bottle under its Arrowhead Springs Brand. The potential deal has brought increased debate over if bottled water is the best use of resources in areas experiencing drought conditions.

Under the plan originally proposed in 2008, Nestle would open a $50 million, 250,000 SF  bottling plant in Cascade Locks, a town of just 1,235 residents and an unemployment rate of 18.8%. City officials there estimate that the project could increase property tax collections by 67% in the town. But the process to bring Nestle Waters to the town has not been without controversy. First, Cascade Locks doesn’t actually own the water source that Nestle wants to tap called Oxbow Springs. The town has groundwater rights, but the State Department of Fish and Wildlife controls Oxbow Springs. The plan calls for Cascade Springs to trade some of its groundwater entitlement to the Department of Fish and Wildlife in exchange for the right to tap Oxbow Springs. The proposal is working its way through various state departments, and the Oregon Water Resources Department will issue a preliminary decision on the proposal this summer.

The process has not been without controversy. About 7,000 citizens have signed petitions attempting to block the water rights exchange that would allow Nestle to draw water from Oxbow Springs. Despite the potential for the plant to bring in property tax increases and create 50 new jobs, opponents argue that the project circumvents the public discussion process and gives a public resource to a private company for free. The proposed deal to trade water rights between the State and Cascade Locks does not require a public interest review, and the approval is not subject to legislative approval. Last month, a group of nine state legislators sent a letter to Governor Kate Brown urging her to block the approval. Ann Linniger, one of the legislators signing the petition said of the plan, “Times are changing in the West. Water is scarce and climate change is happening. This deal with Cascade Locks and Nestle is a stark reminder of the pressures on Oregon’s water supply.  It is a wake-up call about the work that we need to do to protect our communities, wildlife and environment going forward.”

Opponents also argue that the plan essentially gives water that is a public resource for free to Nestle in exchange for basing the business in Cascade Locks. Public agencies (the Town of Cascade Locks and the State Department of Fish and Wildlife) currently own the water rights that will be transferred under the plan. They point out that using water resources for a private company’s gain, particularly in a time of drought is not a proper use of public resources. Nestlé’s operations across the West have faced similar criticism during the drought.

Nestle’s bottled water operations have been no stranger to controversy in the drought. Two bottling operations in California in particular have come under scrutiny over the last few months. Protesters converged on the company’s Sacramento bottling plant in May to urge the company to stop bottling water in California during this time of severe drought. Opponents to the company’s bottling operations have also focused on the company’s water source in the San Bernardino Mountains, arguing again that the water sources Nestle taps have few rules or oversight. A Desert Sun investigation found out that Arrowhead Springs is tapping two water sources (Strawberry Canyon and Deer Canyon in Southern California) despite the fact that the permits from the US Forest Service to tap these water sources expired in 1988 and 1994 respectively. Critics of the company argue that this lax oversight is just one more reason why the company should not be bottling California spring water in a time of drought.

I understand and agree with some of the critics’ arguments. The government agencies that oversee the permits for Nestle should have up-to-date permits, and there should be oversight to make sure that Nestle sticks to the rules of the permit. Further, I also agree that legislators and citizens should have a say in how public resources will be used as in the case of Cascade Locks. However, these open discussions should be a starting point to discuss the merits and drawbacks of a plan. As in any other plan, these projects have both good and bad qualities. It should be up to the people and lawmakers that they appoint to make an informed and transparent decision on whether a project such as the proposed one in Cascade Locks makes sense for the community.