In today’s news media, California gets much of the attention when it comes to the negative and lingering effects of the drought. While other areas do not get nearly as much media attention, drought is affecting vast swaths of the Western United States. As you can see from the most recent US Drought Monitor map below, large areas of Nevada, Oregon, Arizona, Idaho, Washington and Utah face drought conditions. Currently, 76.07% of the Western United States is experiencing some form of drought. The region has also experienced consistent drought conditions for the last year. Indeed, a year ago, 69.19% of the Western United States also was in a drought. These states have to make due with limited water supplies and a range of new regulations designed to conserve as much water as possible through the drought. 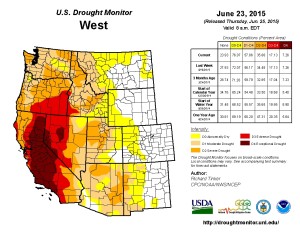 It is in this context that in June the Western Governors Association convened the Western Governors’ Drought Forum. At the Forum, Association Chairman and Nevada Governor Brian Sandoval stressed that drought conditions in the West were the “new normal” and that states must collaborate and think innovatively about new ways to increase water supplies and conservation. Among these new approaches, the Association discussed the potentially larger roles that recycled water could play to increase supplies across the West. New technology and techniques have made recycled water more cost effective, but widespread use may require a whole new series of infrastructure to be built. Is this the most cost effective and best place to focus limited infrastructure dollars to create new water supplies? I will address this issue in my post.

The drought in the West has forced municipalities to rethink completely how they store and use water. Old ways just don’t work in the current drought. For example, a consortium of irrigation districts is building a series of pumps to make the Delta-Mendota Canal run backwards. These districts must invest $700,000 to build the pumps and an estimated $500,000 per month in fuel costs to run the pumps. The water that the consortium has rights to is stored in the San Luis Reservoir, South of their service area. Usually the districts exchange water in the reservoir for water from the Delta. However, because of reduced water flows during the drought, there is not enough water in the Canal to trade with other districts.

It is in this context that water districts must look at any and all sources of water to address the challenges we currently face. An increasingly popular option that some districts are reviewing is wastewater recycling. In years past, these projects either had a stigma attached to them (think of the term “toilet to tap”) or the costs were just too great. The prolonged drought is changing people’s perceptions of these types of projects.

Water districts are looking to use recycled water for both agricultural and municipal uses. Recycled water takes sewage and runs it through a series of pumps, filters and UV light to remove particles and bacteria. Depending on how fully the water is treated, in some instances the water is clean enough to drink directly from the source. (In a recent 60 Minutes episode, anchor Lesley Stahl did just that.) In most instances, the water districts use the treated water for environmental purposes, to replenish groundwater or to water crops. In California, this recycled water supply is in high demand.

Both farmers and urban water users are looking to treated wastewater as a solution to the severe drought. In the Central Valley, the Del Puerto Water District just outside of Modesto is partnering with the City of Modesto to build the largest urban to agriculture water recycling project in California. About a quarter of Del Puerto’s acreage is fallow this summer, and farmers are looking to Modesto’s steady stream of wastewater as a reliable source of water in the drought. The project, called the North Valley Recycled Water Program, will cost $250 million- $150 million to upgrade the Modesto Wastewater Treatment Plant and another $100 million to build the pipeline to serve the farmers.

Urban water users can also benefit from the increased water supplies that treated wastewater can provide. Last week, a group of water Districts in Southern California held a forum to discuss the future of urban wastewater recycling. At the forum, Northern California Representative Jared Huffman pushed his $1.4 billion bill to increase spending on recycled water systems, watershed management, groundwater cleanup and recharge. He and local legislators urged both cooperation between the local water districts and for districts to submit “shovel ready” projects to the Department of the Interior for funding. While these projects can provide some important benefits to the communities they serve, Representative Huffman and all of our legislators must be aware of the potential costs and risks associated with building these plants.

In my mind, the cost of these projects will play a key role in whether they will be successful. In times of drought when water is scarce, costly sources of water make sense because there are no other alternatives. However, these projects often take time to get regulatory approval and build. Wastewater treatment plants have a long useful life and in most instances have long service contracts in place to provide water. If the drought breaks and Mother Nature provides an area with a bountiful water supply, these water sources may no longer make financial sense. The White Paper that the Western Governors’ Association released in conjunction with the Drought Forum admitted that cost considerations and the time it takes to get these projects “shovel ready” limit their effectiveness. The report says, “Treating these [recycled water] sources can be expensive and may require special environmental considerations. In some instances regulatory uncertainty and lengthy permitting requirements can limit adoption.”

Australia learned this the hard way during the drought in the late 1990s and early 2000s. During this time, Australia spent significant resources planning to build desalination plants. Had they been operational during the drought, these plants could have provided an important water source. Unfortunately, cost over-runs and regulatory pressures slowed the plants’ construction. Australia built its first major plant in 2006, well after the worst of the drought. When the drought broke, officials had to shut many of these plants because they were no longer cost effective during times of plentiful rains. Further, the nature of the long-term contract for desalinated water meant that the taxpayers payed for the plant regardless of whether the system was cost effective. Victoria State Premier Ted Baillieu estimated that the 2012-2013 fiscal year cost for the plants would be about $670 million “without one drop of water being drawn from the plant.”

The City of Santa Barbara in California faced a similar situation. The city built a desalination plant in 1992 when California again faced drought conditions. When the rains filled back up the state’s reservoirs, Santa Barbara shut the plant just three months after opening it because it was no longer cost effective. Only now is Santa Barbara considering a proposal to re-open the plant. Initial cost estimates project that the desalinated water may cost 5 times the amount that the city pays for reservoir water.

I cite these examples because our elected officials have to be realistic with the costs and risks associated with recycled water. On the one hand, recycled water is a reliable source of water. However, the use of treated wastewater costs significantly more than imported surface water or groundwater. In the case of the North Valley Recycled Water Program I cited earlier, the water may cost four to five times the amount surface water would cost in a “normal” year where water is available. In this instance, farmers are willing to trade higher cost for reliability.

At some point, (hopefully) this drought will break. I believe that recycled water programs will play an increasingly important role in our water supplies going forward. However, our elected officials planning these projects have to be aware of the costs and that these water supplies may not always provide a cost-effective water source. We should build the most efficient and cost effective water infrastructure with all of these points in mind.