The Western United States remains mired in a serious drought. According to the most recent US Drought Monitor, 74.51% of the Western United States faces some sort of drought conditions. Extreme drought covers 18.87% of the West, with extreme and exceptional drought covering portions of California, Nevada, Oregon, Idaho and Montana. Despite an abnormal dose of rain last week from the remnants of Hurricane Dolores, forecasters have little hope in the immediate term that the record drought will abate. (However, the storms from Hurricane Dolores did break records in some areas for rainfall in July. Los Angeles averages just .01 inch of rain in July. On July 18th alone, Los Angeles received .36 inches of rain, which broke the monthly record of .24 inches set in 1886.) But in the longer term forecasts, scientists are feeling more certain that an El Niño pattern may strengthen this fall to provide drought relief to the parched West. 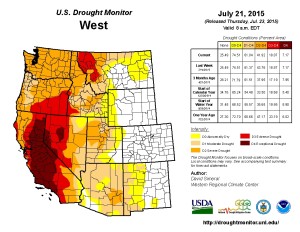 While I certainly hope that an El Niño pattern will continue to strengthen and provide much needed rains to California and the Western US, I am cautious about whether the significant rain storms that are generally associated with an El Niño pattern will actually occur. In 2012 and 2014, forecasters gave initial indications that an El Niño pattern was forming. In both years, El Niño s failed to form. The lack of rain and snow from these storms caused record low snowpack conditions in 2014 and again in 2015. So is this year different? In this post I will look more closely at the science of El Niño formation to see if this winter may bring different conditions to the Western United States.

Looking back over the last few years of record low rainfalls across much of the West, it is interesting to note that on two occasions, forecasters had initially called for a higher chance of an El Niño  pattern forming. However, in both 2012 and 2014, these early predictions failed to materialize as the season wore on. What happened in each of these years? In 2012, the Climate Prediction Center provided an early prediction of warming ocean temperatures in the Pacific Ocean. In June, 2012, forecasters there predicted a 70% probability of an El Niño occurring. However, as the summer wore on, the warming trend in the Pacific failed to intensify. As the graphic below shows, by October, the waters across much of the Pacific were at normal temperatures. (Areas of green in the photo indicate waters near normal temperatures.) 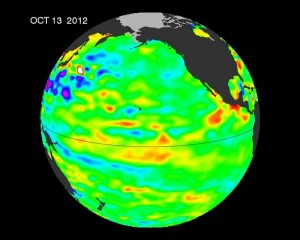 The events of 2014 unfolded in a similar manner to 2012. In the summer of 2014, forecasters at the Climate Prediction Center predicted the chances of an El Niño pattern forming at 80%. But by November, the equatorial Pacific waters did not warm as much as forecasters hoped, and the forecasters reduced the probability of an El Niño forming to 58%. The pattern again failed to materialize. Scientists gave a few explanations for why once promising patterns failed to bring appreciable rains to the Western United States. First, both the warming patterns in 2012 and 2014 even at their peak did not create a strong El Niño pattern (defined as when waters rise between 1.5 and 1.9 degrees Celsius above normal). In the absence of these strong warming trends, the chances for above average rainfalls in the Western US become more mixed.

Further, the ocean warming is just one factor in determining whether the Western US will experience above average rainfall. Atmospheric conditions have to be favorable as well. In the last few years, atmospheric conditions have been extremely unfavorable for bringing storms to California in particular. The reason has a funny name: the ridiculously resilient ridge, a ridge of high pressure that has sat in the Pacific off of the coast of Washington, British Columbia and Alaska. This “ridiculously resilient ridge” brought record temperatures to Alaska and record snowfall to cities such as Boston. (The snow was piled so high in parts of Boston that it officially took until July 14th for a once 75-foot high snow pile in downtown to melt completely!) This, in combination with the weak El Niño conditions caused the drought to intensify across much of the West.

Early indications for 2015 show that a stronger El Niño may be forming in the equatorial Pacific. An image from the National Oceanic and Atmospheric Administration compares the strength of the current warming trend in the Pacific to the peak warming in 1997, one of the strongest El Niño  patterns on record. There are similarities, but researchers warn that again, each and every El Niño formation is different. Michelle L’Heureux, a forecaster with NOAA’s Climate Prediction Center said, “We cannot find a single El Niño event that tracked like another El Niño event.” It remains to be seen whether this year brings any significant rains.

Be careful what you wish for

El Niño brings with it the potential for drenching rains and a reversal of the widespread drought conditions across the Western US. As I wrote in a post last month, the deluge of rain that hit Texas and Oklahoma this spring reversed exceptional drought conditions in both states. But the flooding brought with it economic damages from lost crops and infrastructure that the floodwaters destroyed. California experienced the potential challenges flooding can bring on a small scale during the storms from Hurricane Dolores. During the storms, a bridge collapsed on the I-10 Freeway near Desert Center, California. Floodwaters from the rains ate away at the support structure holding up the road, and the bridge fell. The roadway will remain closed until emergency repairs can fix the bridge and allow some traffic to flow again. Even after the repairs, it could take months before the bridge is fully operational. The economic ramifications go well beyond the cost of repairing the bridge. They affect everything from goods that are delayed in transit on these routes to the restaurants and shops that cater to the 27,000 average daily cars that pass over that section of the 10 Freeway daily.

If we get a strong El Niño pattern this winter and the storms drop large amounts of rain, we unfortunately can expect more damage to our infrastructure. In Riverside County (the County in Southeastern California where the bridge collapse happened) alone, Federal Highway Administration inspection records show that there are 119 obsolete bridges and 79 structurally deficient bridges. Our infrastructure unfortunately may be tested again if we receive drenching rains this winter.

So what can we conclude? The Western United States badly needs rain, and an El Niño pattern may help to put a dent in the severe drought conditions many areas face. However, there is no guarantee that the pattern will continue to strengthen and bring significant rains with it. Also, while significant rains can bring much-needed water supplies, it can also cause damage to infrastructure and the economy. It is important for our state and local governments to be prepared to capture as much of the stormwater as possible to restore water supplies if we get major storms. However, they must also be prepared for the damages that may accompany these storms.