So much for a “drought-busting” El Niño winter in California. While the warming of the equatorial Pacific waters (known as the Oceanic Niño Index or ONI) was one of the strongest on record, California unfortunately did not enjoy the plentiful rains that many expected. Atmospheric conditions steered storms to the Pacific Northwest and away from Southern California, much to the surprise of many meteorologists. As a result, Seattle officially experienced its wettest winter in recorded history. In California, tests conducted last week showed that the state’s overall snowpack was less than average. While the 2016 spring survey was markedly better than one year ago, (Governor Jerry Brown stood on a bare meadow exactly one year ago – it was the first and only time since 1950 that there was no snow at the Phillips Station site on this date) snow at the site totaled 58.4 inches, just 97% of average. Statewide snow totals average just 87% of average for this date. The snow totals in the state decrease the further south you go. While the Northern Sierra has a 97% of average snowpack, the Central Sierra has 88% and the Southern Sierra only 72%.

As such, the vast majority of California will have to contend with another year of drought conditions. Despite the March rains that helped reservoir conditions in the north, 96.45% of the state still faces drought conditions according to the latest US Drought Monitor report. Exceptional drought covers 34.74% of the state, including large swaths of the Central Valley and the population centers of southern California. While the state has not made final determinations, citizens in parts of the state likely will continue to face water usage restrictions this summer. Also, agricultural areas south of the Delta that rely on the Central Valley Project for supplies will face another meager year – the US Bureau of Reclamation announced on April 1st that while CVP contractors north of the Delta will receive 100% of their allocations, agricultural water service contractors south of the Delta will receive just 5% of their allocation. CVP contractors that rely on the New Melones Reservoir (which currently sits at 26% of total capacity) will again receive no CVP water in 2016.

There are multiple factors that the US Bureau of Reclamation considers when determining the allocation to its contractors. Part of the challenge is that the winter’s storms provided a much more robust supply in northern California than south. However, an important and central theme to the drought in California is that a combination of regulatory hurdles and uneven water supplies across the state are hampering water districts’ ability to capture as much water as Mother Nature provided us this winter. In this post, I will address both of these topics and how it is affecting our water supplies as we head into the summer.

Unintended Consequences of Regulation: The Delta Smelt, and Pumping Restrictions

It seems like every year, the Delta smelt is in the middle of the fight over water rights vs. environmental interests. This year, pumping restrictions are playing a key role in the imbalance between north and south water deliveries, particularly for the Central Valley Project. Unfortunately, we have seen this discussion play out year after year. In 2014, The Journal of Water featured an article entitled “Unintended Consequences of NRDC v. Jewell: Withering Away the Central Valley Project?” The article began by saying, “The United States Court of Appeals for the Ninth Circuit decision in NRDC v. Jewell may seem like another stanza in an old song about the Endangered Species Act and Water Rights.” This year adds yet another stanza to the song. (Maybe the song is “The Never Ending Story” from the eponymous 1980s movie?) There are real-world implications to the lack of water moving through the Delta. A quick look at the California Data Exchange Center’s current reservoir conditions show the disparity between water supplies north and south of the Delta. As of April 5th, the state’s two largest reservoirs Lake Shasta and Oroville are 89% and 88% full respectively. Both lakes have released water over the last few weeks to make more room for snowmelt and potential April storms. Lake Oroville has not opened its spill gates for more than five years.

Further south, the water supplies are much more tenuous. San Luis Reservoir currently sits at only 51% of capacity. Southern California reservoirs Lake Perris and Castaic Lake sit at 36% and 40% full respectively. In the eastern Sierra Mountains, New Melones Reservoir sits at 26% of capacity. While the state’s water infrastructure would not allow Delta water to fill New Melones Reservoir, the state theoretically could send excess water through the Delta to fill reservoirs along the State Water Project system including San Luis and Castaic Lake. However, pumping restrictions are only allowing a trickle of available water to users and storage locations south of the Delta.

For parts of March, Lakes Shasta, Oroville and Folsom Lake all released water. For example, as the rains hit northern California in early March, Nimbus Dam (the afterbay of Folsom Lake) increased releases from approximately 2,500 CFS at the beginning of March to a peak of 20,000 CFS on March 14th (see the graph below). Lake Oroville released water at 5,000 CFS in late March. To put this amount of water into perspective, 1 CFS (cubic foot per second) equates to 1.98 acre-feet for a 24 hour period. When the Bureau of Reclamation was releasing 20,000 CFS out of Folsom Lake in mid-March, they released water at a pace of 39,670 acre-feet per day! 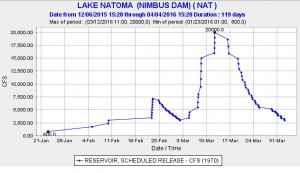 This water supply could have been extremely beneficial to water suppliers south of the Delta, as reservoirs such as San Luis have capacity to store this water. Pumping restrictions to protect the Delta smelt and migrating Chinook salmon have allowed a very small percentage of this supply to flow south – most of it went through the Delta and out into San Francisco Bay. This dynamic resonated with the many CVP contractors south of the Delta that will receive only 5% of their allocation this summer. Byron-Bethany Irrigation District General Manager Rick Gilmore said response to the announcement that, “Today’s paltry allocation announcement is nothing short of absurd. It is the result of the rigid and ultimately ineffective environmental regulations that prioritize fish while punishing the people who provide food for California and the rest of the country.” He argued that during the time where the Bureau of Reclamation was spilling water from northern reservoirs, the pumps moving water south through the Delta were only moving approximately 3,000 CFS.

US Senator Dianne Feinstein pointed out that she has tried to pass federal legislation to address some of these issues, but the bill has gone through 26 drafts and had 43 amendments to the last draft alone. She called the negotiations related to the federal water legislation more difficult than getting the assault weapons ban passed in 2004. It is clear from Feinstein’s comments that a political solution to the state’s water problems likely will be an extremely tough battle.

There are arguments to be made on both sides of the endangered species issue. It is clear that the Delta smelt population has plummeted over the last few years. Despite decent water conditions this year in the Delta, researchers are not sure whether the species’ extremely low numbers will be able to rebound. Carl Wilcox with the California Department of Fish and Wildlife said, “The population abundance is very low. It’s been declining throughout the drought, after a rebound in 2011 when we had really good water conditions.” On the other hand, millions of people and millions of acres of farmland rely on moving water through the Delta. With the overabundance of water in the northern part of the state, we should try to take advantage of moving those supplies to a place where they can be stored. There is plenty of storage space in reservoirs south of the Delta that could take advantage of these supplies.

The critical questions in my mind going forward are: Can we save the wild Delta smelt population with the current paltry numbers researchers are finding? If they can be saved, how much water does the species need to survive? How much water (if any) can be diverted safely south? And most importantly, what is the balancing point between the water needs of endangered species and humans? If these questions are not answered, I am afraid that we will add one more line to this already very long song.