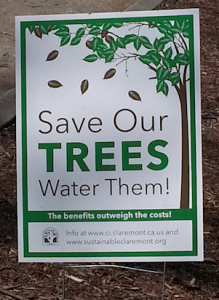 On February 2nd, the California State Water Resources Control Board revised and extended the mandatory urban water conservation regulations through October. While the newly-adopted revisions make marginal changes on some issues of fairness, which will be covered in a later post, environmental impacts remain.

The environmental impacts of the mandatory conservation regulations are tied to residential landscaping—or more specifically, the absence or reduction of watering that occurs when residents allow lawns to go brown or replace them altogether.

In a paper published in the online journal, PalmArbor, environmental horticulturists Don R. Hodel and Dennis R. Pittenger note the impacts of miserly water use.  After highlighting that residential landscaping makes up only about 9% of statewide water use, they point out a number of benefits provided by trees, shrubs, ground cover, lawns, and flowers—including five environmental benefits:

The other benefits they note cover points like aesthetic, psychological, recreational, and economic benefits.

It goes without saying that removing trees, shrubs, ground cover, lawns, and flowers leads to the loss of these benefits—but so does failing to properly water such plants.

In a report by ABC Action News in Fresno, Hodel argues that the mandatory conservation regulation could have been structured in way that values and preserves these benefits.

“My concern with the way the state imposed watering restrictions, is they were made without any knowledge of how plants grow, how they interact with the soil, how water moves into the soil and how the soil holds water,” said Hodel.

In their paper, Hodel and Pittenger suggest that choosing the right plants and watering judiciously would be a better solution that yields water savings and maintains the benefits provided by the plants.

Their argument is echoed by the City of Claremont, California, the location of Hydrowonk’s offices. Claremont has received a Tree City USA designation from the National Arbor Day Foundation for 30 consecutive years.

In order to preserve the trees, which the city considers one of its most valuable public resources, Claremont established a 72-page tree policy that includes watering schedules and other maintenance activities, along with other information related to the city’s trees. In addition, the citizen action group, Sustainable Claremont, has created a Tree Action Group, and the non-profit historic preservation group, Claremont Heritage, argues that the city is in a tree crisis and has developed a video to guide citizens through proper watering and care for the city’s trees. All three efforts are aimed to educate the public on actions needed to preserve the trees.

Under the current campaign, public space throughout the city is peppered with campaign signs that read, “Save Our Trees: Water Them.”

Such concerted effort to mitigate the potential loss opens the question of whether the efforts to replace lawns and limit outside residential water use represent the highest and best policy on water use.