In August 2015, forecasters predicted that a “Godzilla El Niño” would be heading to the western United States, potentially wiping out (or at least putting a major dent) in the widespread drought. Meteorologists pointed to the similarities between the ocean warming in 1997 and the pattern seen last summer. So far, the forecasters correctly predicted that the El Niño warming patterns would continue to build and rival the intensity of the 1997-1998 El Niño. But unfortunately for the drought in the western United States, the El Niño ocean warming patterns have not translated into significantly above average rainfall totals. After series of promising storms in January, a warm and dry February provided little relief to the drought. At the beginning of February, the US Drought Monitor reported that 39.41% of California faced exceptional drought conditions. At the last update on March 8th, 38.48% of the Golden State had exceptional drought, a reduction of less than 1%. 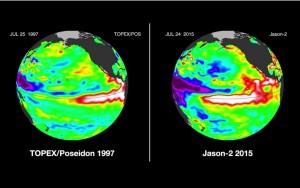 Forecasters warned that no two El Niño formations are alike, and this one has proven the case yet again. In California, water supplies in the northern part of the state look much more favorable than the southern part. Further, there have been great differences in precipitation between places very close to each other. For example, Folsom Lake and New Melones Lake are approximately 75 miles away from each other. According to the California Data Exchange Center, Folsom Lake is 71% full, and the US Army Corps of Engineers is actually releasing water from the Lake to leave room for further storm events.  But 75 miles south at the New Melones Lake, the reservoir is only 21% full, and at 34% of its historical average on this date. How could two reservoirs so close to each other experience such different outcomes? And what are the implications for the broader water supply in California? I will address both of this issues in this post.

When conducting research for prior posts I have written on El Niño, forecasters generally agreed that no two El Niño patterns are exactly alike, and even with modern technology, their exact effects are very hard to forecast. The 2015-16 El Niño cycle has lived up to both of those traits. In a January post, I wrote about how the Pacific Northwest generally receives less rainfall during an El Niño because the storms usually track further to the south. But this El Niño has defied these expectations. For example, Oregon and Northern California have seen much more rainfall than Southern California, an unexpected twist to this El Nino. Just 3 months ago, the US Drought Monitor reported that 59.57% of Oregon’s land mass had extreme drought conditions. According to the March 8, 2016 report, the state has no extreme drought conditions. Southern California on the other hand has not seen nearly the amount of precipitation that Northern California and the Pacific Northwest has received, surprising some scientists. The El Niño conditions persist – but the weather effects haven’t played out in the manner most forecasters expected. National Weather Service Meteorologist Mark Moede explains that a ridge of high pressure hung over Southern California for most of February, tracking storms much further to the north than originally anticipated. 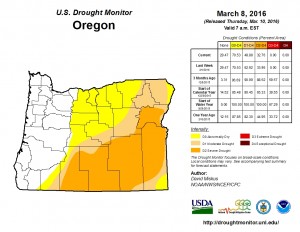 Further, the storms that have hit California have shown some interesting “gradients” – a phenomenon where an area can receive significant amounts of rain during a storm and another area close by can receive almost nothing. For example, the California Weather Blog writes that for storms later this week, “the potential exists for a pretty extraordinary north-south gradient through Friday afternoon, with some model solutions bringing more than 6 inches of rainfall to the northern San Francisco Bay Area while San Jose–just 30-50 miles away–sees almost nothing!” These differences between precipitation totals are showing up in the state’s reservoirs as well.

First the good news. The California Data Exchange Center reports that Lakes Shasta and Oroville are currently at 70% and 63% full respectively. The two lakes represent the largest storage reservoirs we have in the state, and both have not been close to full in the last five years. Since March 1st, Lake Shasta added 389,116 acre-feet into storage. A series of storms will continue to hit Northern California this week, and Louis Moore, Public Affairs Officer with the US Bureau of Reclamation says that it is “possible” Lake Shasta could completely fill by the end of the month.

Further south, water storage is not as promising. South of the Delta, Millerton Lake on the San Joaquin River has the highest percentage of water in storage at 60%. Lakes in Southern California such as Castaic Lake and Lake Perris sit at 32% and 34% of capacity respectively. The “atmospheric rivers” that have hit Northern California largely have missed Southern California and the lower Central Valley. This dichotomy may have implications for the state’s water supply.

The Drought Will Remain a Fact of Life in California

Despite the welcome rains in Northern California, the state as a whole will continue to face drought conditions. Butte County, where Lake Oroville is located, still is completely covered with extreme and exceptional drought. Only a very small portion of Del Norte County (in extreme Northwestern California along the Oregon border) is completely drought-free. Extreme and exceptional drought still covers 60.86% of the state. The unfortunate truth is that even with a “March Miracle,” it is highly unlikely that the drought in California will completely disappear. The state will still have to live with legacy issues associated with five years of crippling drought.

First, the state faces logistical challenges to move water through the Delta. Years of drought have contributed to the decline of species such as the Delta smelt, whose populations plummeted for a second year in a row. Spring trawls captured 7 fish in January and 6 fish in February, prompting biologists to declare that the species is at the brink of extinction. Pumping restrictions have also been in place that slow water conveyance to protect endangered species such as the smelt. Until these pumping restrictions are loosened, water stored north of the Delta will not be fully available to users in Southern California.

Further, there are limits to the amount of water reservoirs can capture when they near full capacity. Recently the US Army Corps of Engineers has released water from Folsom Lake to retain storage capacity and prevent a major flooding event. Some water officials are concerned that the Army Corps is releasing precious water during the drought, but the Army Corps has a point: In 1986 and 1997, the Corps had to make emergency releases from Folsom Lake to prevent the Lake from overflowing. The emergency releases caused significant downstream flooding but averted a more catastrophic scenario. In 1928, the Saint Francis Dam in Los Angeles County catastrophically failed, sending an estimated 140 foot high wall of water downstream and killing an estimated 600 people. While it is important for California to capture as much water as possible in rain events, we cannot do it at the expense of the safety of thousands of people.

It is good news that Northern California is receiving significant amounts of rain. However, we have to be realistic with our expectations. The drought will remain a part of life in California, and we must continue to plan to use water supplies wisely throughout the state.