As I wrote in a March 2016 Hydrowonk Post, the El Niño rains did not provide even drought relief across the western United States. Some areas have seen record rainfall. For example, Houston, Texas recorded the wettest April on record this year. A slow moving storm from April 15-18 dumped almost a foot of rain in some areas of greater Houston, more than 3 times the average rainfall for the entire month of April. The Pacific Northwest also received very plentiful rainfall. At the beginning of the water year (September 30, 2015), Washington State had 100% of its land mass covered in some form of drought according to the US Drought Monitor. As of this week, 96.71% of the state was drought-free. Unfortunately, not all areas in the west fared as well as the Pacific Northwest in terms of drought relief.

In particular, the El Niño rains largely missed the Colorado River Basin. As the chart and US Drought Monitor map below show, all seven basin states have some form of drought. Colorado and Wyoming have the lowest percentage of drought in the basin, with 25.36% and 39.6% of each state respectively. At the other end of the spectrum, all of Arizona’s land mass currently has some form of drought. Exceptional drought still covers 21.04% of California, including all of the City of Los Angeles and large portions of the Central Valley. The lack of rainfall in the basin is among the reasons the elevation of Lake Mead is approaching critical levels. As of April 27th, the water level behind the Hoover Dam stood at 1,076.62 feet, raising concerns about the possibility of a shortage declaration. The US Bureau of Reclamation estimates that there is a 37% probability of a shortage declaration in 2017, and a 59% probability in 2018.

If a water shortage is declared, the state hardest hit on the Colorado River would be Arizona. However, recent negotiations among the basin states may share some of the burden of water cutbacks. But is it in the best interest of Arizona? In this post, I will address why Arizona may experience some of the first cutbacks among Colorado River users and how the recent negotiations among basin states may change Arizona’s fate. 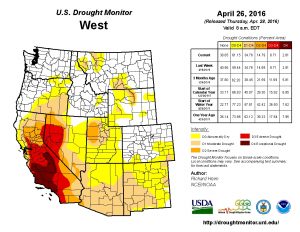 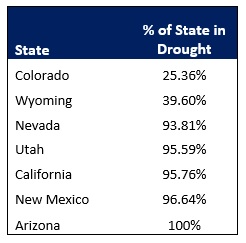 The concept of seniority of water rights often applies to water in the west, and seniority plays a key role in understanding Arizona’s position on the Colorado River. As part of the Colorado River Compact, Arizona is entitled to 2.8 million acre-feet of water each year. However, Arizona’s major population centers such as Phoenix and Tucson are far from the Colorado River. The state needed a system of aqueducts to move their entitlement from the river to end users. In 1946, a group of interested parties formed the Central Arizona Project Association to educate and inform citizens of Arizona about the need for a conveyance system to take advantage of the Colorado River’s supplies. It took twenty-two years of negotiations and lobbying for President Lyndon Johnson to sign a bill authorizing the construction of the Central Arizona Project (CAP) in 1968.

During that time, Arizona and California fought a series of legal battles in court over the two states’ share of the Colorado River’s Lower Basin allocation. However, the negotiations that took place in the halls of Congress in the 1950s and 60s are having an effect on Arizona’s water policy now. According to the Colorado River Water Users Association, California’s congressional delegation initially blocked the passage of legislation to authorize the CAP. Arizona did not have enough votes to get the CAP passed without California’s support. In exchange for that support, Arizona agreed to subordinate its claim to the river. As such, when supply shortages occur, Arizona’s water supplies from the Colorado will be the first to be reduced.

The water levels in Lake Mead have generally been dropping since the early 2000s. In April 2000, the water level was at 1,208.78 feet according to US Bureau of Reclamation  records. In April 2012 early in the current drought cycle, the water level was at 1,123.93 feet, almost 50 feet above current levels. Both in the short and long-term, water officials assume that shortage conditions in the lower basin of the Colorado River may persist. Arizona would be the first state that the water shortages affect. But recently, it has been working closely with the other lower basin users to “share” the burden of the cuts that will be necessary should water shortages persist.

Will Negotiations with Other States Change Arizona’s Fate?

Arizona will be the first lower basin state to experience cutbacks if the US Bureau of Reclamation declares a water shortage. However, recent negotiations among the states have tried to ensure that all states bear some burden of cutbacks when they arise. Ironically the negotiations, while not finalized, could lead to even further initial cuts for Arizona. Why would Arizona to agree to even deeper cuts? Initial negotiations show that California may also face cutbacks if Lake Mead elevations keep dropping.

According to The Desert Sun, Arizona’s cutbacks in a first-level shortage would increase to 512,000 AF from 320,000 AF it originally agreed to. Nevada would increase its cutbacks to 21,000 AF from 13,000 AF. In a move Arizona Department of Water Resources Director Thomas Buschatzke calls “landmark,” California has initially expressed some willingness to implement cutbacks of between 200,000 and 350,000 AF if Lake Mead water levels drop to between 1,045 feet and 1,025 feet. While these negotiations have not been finalized, the Arizona delegation hopes that a deal can be finalized by the end of the year so that they can take the framework before the state legislature.

Participants in the initial negotiations all argued that it is in the best interest for all Colorado River water users to ensure that water supplies do not get pushed to the brink. Southern Nevada Water Authority General Manager John Entsminger said, “I think it’s in the best interests of the people of all three states if we can get something done this year. What you’re seeing here is a recognition of the increasing risk of Lake Mead going below pretty critical elevations and everybody realizing it’s going to take everybody on the river to solve the problem.” General Manager Theodore Cooke of the Central Arizona Project echoed his sentiments saying, “Our hope is that we have some sharing of the burden so it doesn’t just fall on the backs of some.” But even with some sharing of the burden, Arizona will still face some tough choices in the future about water allocation to end users.

What Arizona is doing to Combat Long-Term Supply Shortages

It is very likely that Arizona will face some sort of water cuts in the future from the Colorado River. The state will have to determine how its end users will share the burden of the cutbacks going forward. Theodore Cooke pointed out that agricultural users initially assumed that they would bear most of the burden of proposed cutbacks. But municipal water users will likely also have to face cutbacks in the future.

Water banking is and will continue to play a role in providing dry year water supplies. Phoenix has already started to tap into banked water to offset some of its need for water from the Colorado River. The Central Arizona Project can deliver water as far south as Tucson, creating some water banking opportunities there as well. The San Xavier Water District in Tucson is using water from the CAP to recharge water on the Santa Cruz River. The water banking project serves two purposes – it increases groundwater supplies and helps to restore native habitat along the river.

As water resources in the Colorado River Basin continue to be strained, it will be important to address water supply challenges both early and holistically. While the supply cuts may be especially painful for Arizona, I believe it is a positive step forward that all users in the Lower Basin, including California, recognize the collective need to manage the basin sustainably.