In the first part of my series on earthquakes and fracking in Oklahoma, I wrote about the correlation between hydraulic fracturing activity in the state and the increased frequency of earthquakes. As more injection wells came online in the state to dispose of the produced fluid from fracking operations, the state saw a vast increase in the number of earthquakes, primarily centered around north-central Oklahoma. While scientists are still determining why the earthquake activity is centered in certain parts of the state, they are almost certain that there is at least some correlation between injection well operations and increased seismic activity. But what can Oklahoma do to slow or stop the frequency of these earthquakes? I will address the issue in this post.

The Link between Fracking and Earthquake Activity in Oklahoma

Oklahoma is in uncharted territory in regards to earthquake activity, and interests on both sides are trying to influence the political process in terms of a response. On the one hand, there seems to be a pretty clear correlation between the increased amount of injection well activity and earthquakes in the area. The Office of the Secretary of Energy and the Environment went so far as to make the following statement on its “earthquakes in Oklahoma” site:

“While we understand that Oklahoma has historically experienced some level of seismicity, we know that the recent rise in earthquakes cannot be entirely attributed to natural causes. Seismologists have documented the relationship between wastewater disposal and triggered seismic activity. The Oklahoma Geological Survey has determined that the majority of recent earthquakes in central and north-central Oklahoma are very likely triggered by the injection of produced water in disposal wells.”

The new scientific evidence has given fodder for concerned citizens and environmental groups to file lawsuits against the major oil companies operating in Oklahoma. In April 2016, the Oklahoma Sierra Club filed an amended lawsuit against Sandridge Energy, Chesapeake Energy, Devon Energy and New Dominion Resources. The lawsuit asked for an immediate and substantial reduction to the amount of produced water injected back into the ground to levels “that seismologists believe will not cause or contribute to increased earthquake frequency and severity.” While these lawsuits wind through the halls of justice, Oklahoma can continue to implement some solutions to help reduce the impacts of earthquakes on the citizens of the Sooner State.

Potential Solutions for the Oil and Gas Industry

So what are some potential industry solutions? First, I believe that getting a fuller understanding of the science and seismology behind the earthquake occurrences is key to understanding the causes of the increased seismic activity in the state. We have a pretty clear picture that injection wells are causing some of the earthquake activity, but it is unclear to what extent. The state should also have greater authority to curtail (at least temporarily) injection wells around earthquake epicenters while further studies on the causes of seismic activity takes place. As of 2015, the Oklahoma Corporation Commission (OCC, which regulates the oil and gas industry) mandates that new injection wells within a 6-mile radius of the epicenter must operate with a “yellow permit.” The “yellow permit” allows the OCC to stop injections immediately after an earthquake occurs. Earlier this year, Sandridge Energy took seven injection wells offline after the OCC asked the company to cease operations at these sites.

Oklahoma took further steps this year to curtail injection well use. Starting in March, the Oklahoma Corporation Commission stopped 245 injection wells in a 5,200 square mile part of Northern Oklahoma from operating. At the end of May, the state finalized plans to further reduce saltwater disposal in north-central Oklahoma. The plans aim to reduce the amount of injected wastewater by 40%.

I believe a more pressing priority however is to find more widespread technologies and alternatives to reduce the amount of produced water put back into the ground. Companies such as AGT Water Systems have technologies to filter the oil, salts and chemicals out of produced water. These products work directly at the well pad or injection well site and can reduce truck traffic hauling water to off-site disposal locations. Depending on the concentrations of salts and chemicals, the technology can either treat the water for use in agricultural applications (similar technologies have supplied ag operations in Bakersfield, California for the last few years and tests have shown no negative impacts to food production) or treat the produced water for re-application in a new well.

This technology could also help to solve another recurrent challenge in parts of Oklahoma: drought. While recent torrential rains caused 9 counties to declare a state of emergency in June, Oklahoma has seen its share of drought in recent years. Data from the US Drought Monitor shows that just two years ago, drought covered 91.52% of the state. A small group of oil companies has convened a working group to determine the efficacy of a long-term program to send some treated produced water to drought-prone areas of the state. But these plans all hinge on the profitability of oil companies operating in the state, and the price of oil and the cost associated with new regulations have direct impacts on the companies’ bottom lines.

After spending much of the first 3 quarters of 2014 between $90 and $100 a barrel, (see chart below) oil prices began to fall precipitously in October 2014 as the United States, OPEC and other major producing countries refused to cut back supply amid slowing demand.  In early 2016, oil prices began to fall further, touching below the $30 per barrel mark for the first time since the early 2000s. During the price drop, rig counts and capital expenditures decreased across all areas of oil drilling in the United States including Oklahoma. However, a consistent rise off of the bottom in prices from February 2016 to present has brought back some supply online. Even still, new costs associated with regulations related to wastewater disposal in Oklahoma pushes drillers’ break-even prices higher. While oil currently hovers around $50 per barrel, industry experts believe that the increased costs of hauling produced water out of areas with banned injection wells will require oil to increase to around $60 per barrel before more new wells will come online profitably. 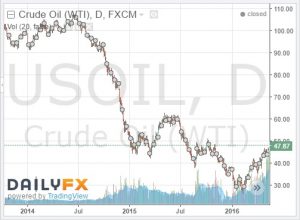 So far this year, the combination of reduced drilling activity coupled with the new regulatory climate seems to have slowed down the frequency of seismic activity in the state. On June 13th, Reuters reported that 2016 is on pace to see the first year-over-year declines in the number of earthquakes in the state. It remains to be seen how the rest of the year plays out. In the meantime, the issues in Oklahoma related to fracking and seismic activity are dynamic, and it is unlikely to be resolved overnight. Regulations such as the “yellow light” programs will continue to evolve. I believe that a combination of further scientific reviews, appropriate regulations and the increased use of technology to reduce injection well usage will help Oklahoma to reduce earthquake frequency and keep the economic benefits associated with oil and gas operations in the state.