As you can see in the chart above, Massachusetts in particular is facing drought conditions that rival California’s. While Massachusetts has no amount of land in the exceptional drought category (21.04% of California is under the exceptional drought category), 100% of the Bay State is experiencing some level of drought. Further, 52.13% of Massachusetts is experiencing extreme drought or more, compared to 42.8% of California. Other states in the northeast including Maine, New Hampshire and New York all have some areas of extreme drought. 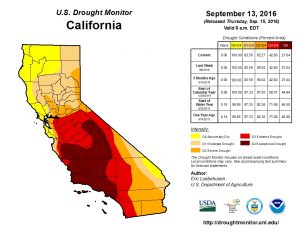 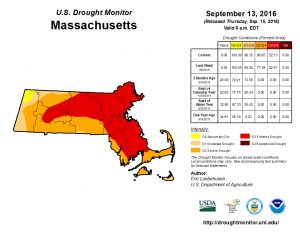 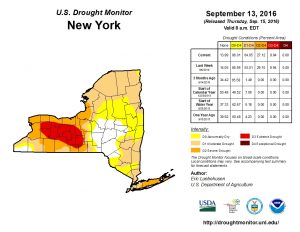 While the drought conditions in the area have not lasted nearly as long as the drought in California, (as recently as March 2015, Massachusetts had no land mass in drought) both states face many of the same issues. In both states, some reservoirs have dropped significantly, putting cities’ water supplies in jeopardy. Although farming revenues in Massachusetts are much smaller than California’s, the drought has caused hardships on farming operations across the state. Citizens in urban areas are facing some similar restrictions on water usage that California Governor Jerry Brown mandated in 2015. Considering that these states face very similar challenges related to the drought, are there lessons that Massachusetts can take from California’s five year drought conditions to help alleviate their challenges? In this post, I will address some of the similarities between the two states’ drought conditions and the things each can do to better address water management in the future.

While California has rightfully given much scrutiny as of late to shrinking groundwater supplies and the effects of the implementation of the Sustainable Groundwater Management Act, surface water reservoirs remain a key component of California’s water supply. Since extreme drought hit the Golden State in 2014, some areas rely on groundwater for up to 75% of their supply. But in more “normal” circumstances, that number is reversed. PBS News Hour reports that in hydrologically average years, surface water provides approximately two-thirds of the state’s water supply. However, extremely low reservoir levels combined with rapidly declining groundwater levels in some areas have caused failures of municipal water supplies. For example, the City of Porterville received much media attention in 2015 when a large number of wells in the city went dry. According to the Visalia Times-Delta, between January 2014 and April 2015, 976 wells in Tulare County went dry. Approximately 600 of the 976 dry wells occurred in east Porterville. The city along with emergency management agencies and non-profit organizations scrambled to provide bottled water and temporary tanks to citizens with no running water. Unfortunately, regulatory red tape and fighting between government agencies hampered the efforts to restore water service to residents as quickly as possible.

In the summer of 2015, Tulare County and the State Department of Water Resources agreed to provide $1.2 million to drill a well and provide a new source of municipal water. The drilling was completed in October 2015, but infighting between Tulare County and Porterville caused delays. According to the Los Angeles Times, Tulare County agreed to sell the well to Porterville and the city agreed to operate it. However, the County and Porterville could not agree on how much water each entity would be entitled to. After the bickering began, DWR backed out of the discussions and drew up plans for providing water hauling services without assistance from Porterville. Porterville then reacted by cutting off Tulare County’s access to the city’s municipal water supplies. As of May 2016, the well that could have helped the city’s residents remained untapped, a victim of infighting between two government agencies that should have been helping its citizens cope with an emergency.

So what can we learn from this situation to apply to the drought in New England? Some areas of New England facing extreme drought must find alternative sources of water, and collaboration between different government entities will be crucial to the success of these programs. Reservoirs in parts of Massachusetts are dropping to levels where mandatory water cutbacks are in place, and some cities are scrambling to find alternative sources. A map from the Massachusetts Department of Energy and Environmental Affairs (click here) shows that about 140 towns and cities that have put outdoor watering restrictions in place. For some of the hardest-hit areas, this is still not doing enough to slow the reductions in reservoir water levels. For example in the Town of Scituate, city officials have put a complete outdoor watering ban in place and are urging residents to take short showers and limit water use. Scituate Reservoir currently sits at 25% of average, and during an interview with WBUR, Scituate Public Works Director Kevin Cafferty said that the reservoir may hold 30-45 days more water. The Scituate Reservoir is the main source of drinking water for the town, and unfortunately they are not connected a system of aqueducts that can supply them with water from other parts of the state. However, some cities in the state facing dwindling water supplies do have that option, and collaboration will be crucial to solving the drought crisis.

While not as extensive as the maze of aqueducts and reservoirs in California, Boston and some surrounding cities have access to a series of reservoirs aqueducts that currently have some excess supply. Cities with limited local water resources are looking to the Massachusetts Water Resources Authority to provide them with some much-needed drought relief. The cities of Worcester and Ashland have seen their local water supplies dry up, but they have access to the aqueducts from the Quabbin Reservoir, which currently sits at approximately 84% of its 412 billion gallon capacity. Worcester will pay MWRA $1.7 million per month to receive these emergency supplies. Cities such as Cambridge and Lynn may soon follow suit. MWRA officials say that the Quabbin Reservoir has enough in reserve capacity to weather a few more years of drought without concern.

Unfortunately for municipal planners and water officials, we have no way of knowing definitively when the drought will subside. When the drought started in California in 2012, few imagined the duration and severity of the drought in the Golden State. In August, the San Luis Reservoir, an important piece of infrastructure for both state and federal water deliveries south of the Delta fell to its lowest levels in more than 25 years. Pumping restrictions through the Delta to protect endangered species and the need to keep water in north-of-Delta reservoirs to provide cold water for the fall runs of salmon have hampered the Department of Water Resources and US Bureau of Reclamation from providing contractors with water in parts of the Central Valley. Only protracted negotiations between USBR, Arvin-Edison Water Storage District and Kern County Water Agency (see this post in the Bakersfield Californian for all of the details on how the deal came to fruition) averted a crisis this summer, and water eventually made it to the contractors who need it most. However, the USBR will still need to make arrangements to repay the approximately 380,000 acre-feet of water it borrowed through exchange agreements either this winter or next year.

I mention this situation because it is challenging for any organization to respond to a crisis at the eleventh hour, particularly when environmental and pumping restrictions are tying its hands. The lesson for Massachusetts and other areas of New England? It is impossible to know whether the drought will lift this winter or five years from now. If the drought persists, other cities may have to scramble to come up with finite water resources. It would behoove the members of the Massachusetts Water Resources Authority to begin some longer-term contingency planning to come up with a program of who will get water and under what terms if the drought persists. Planning and negotiations now will avoid last-minute negotiations under duress and ensure that the process of providing water to cities in need will happen in a more orderly fashion.

Let’s hope that the drought in both regions I discussed abates soon. But regardless, each area should take a hard look at drought planning and put contingencies in place to account for the possible challenges that a long-term drought could bring.