We witnessed an amazing turn of events over the last week. At the time of publishing my Hydrowonk post last week, virtually every major poll had Hillary Clinton winning the presidency, some by a wide margin. Polls from major media groups, such as The Los Angeles Times for example, assumed that Clinton would win 352 electoral votes. Other polls projected that the Democrats had a very good chance of retaking the Senate. Instead, Donald Trump secured 290 electoral votes (at the time of publishing this post, Michigan still has not certified the final presidential results) by sweeping key swing states in the Midwest and flipping traditionally blue states such as Pennsylvania and Wisconsin. The Harvard Business Review argues that relying on telephone calls to get accurate polling data is an outdated and inaccurate system now that most phones have caller ID, thus making it more likely that people will not pick up the phone for a pollster. Further, polls can tell you who a person may vote for, but it cannot guarantee that the person will make it to the polls on Election Day. But regardless of the causes for the very wrong polling data, Donald Trump now begins his transition as President-elect while retaining majorities in both the House and Senate.

Now that Donald Trump is beginning his transition to the White House, many citizens and businesses are wondering how his policies will affect their lives and businesses. In particular, how will his policies affect water policy and the agriculture industry? There are three policy areas that I will address in this post related to the Trump presidency: Water and the environment, immigration and foreign trade. While every politician makes campaign promises, in actuality, it is much more complicated to implement these proposals, even with Republicans retaining majorities in the House and Senate. I will also address some of the challenges he will face implementing these campaign promises.

Water and the Environment

Despite the fact that Hillary Clinton won 61.5% of the vote in California and the state was never in question, these oversized odds did not stop Donald Trump from campaigning and fundraising in the state. At a late August fundraising luncheon, Trump raised about $1.25 million from about 250 donors in Tulare, mostly representing agricultural interests. Residents of major agricultural counties including Kern, Tulare and Kings Counties also voted in favor of Trump. Why are these interests so keen on seeing a Trump presidency? While he has not been clear on how he will implement it, he made comments on the campaign trail that he will do all he can to clear impediments to pumping in the Sacramento-San Joaquin Delta. In May, Donald Trump made a campaign stop in Fresno to gain support from the farming community. He commented that California has “plenty of water” and that water that farmers could use is going out to sea “to protect a certain three-inch fish.” His supporters were also encouraged with his comments in October 2015 that he would cut the Environmental Protection Agency. His supporters believe that he could have an impact on water regulations because federal agencies such as the US Bureau of Reclamation and the US Fish and Wildlife Service have input into how much water either stays in rivers or is diverted. Connie Conway, former California Assembly minority leader said, “It is a federal issue, and it is the Feds who are keeping the pumps off. So I’m very hopeful he could do that.” 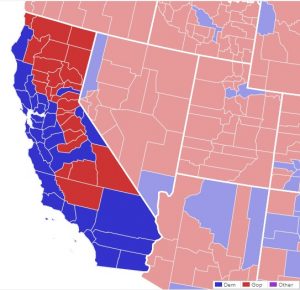 In actuality, the issue of how much water to divert out of the Delta is a much more complicated issue than Trump describes. First, both the US Bureau of Reclamation and the State Department of Water Resources operate pumps in the Delta, and Donald Trump’s administration would have no direct authority to alter the operation of the State Water Project. Further, while the US Bureau of Reclamation directly operates the Jones Pumping Plant in Tracy, the Bureau does not have a direct say over how much water they can draw through the pumps. Currently, the State Water Resources Control Board is creating a draft plan that will set guidelines for how much water will be diverted and how much water will stay in-stream for environmental purposes. Many organizations and interests, including the US Fish and Wildlife Service, State Department of Fish and Game, the Department of Water Resources as well as a host of environmental, agricultural, municipal and business interests will weigh in on the draft. It is also very likely that litigation will ensue regarding the plan regardless of the guidelines. So while the Trump Administration may have some influence over the amount of water flowing to the Delta pumps, he will not have a “magic wand” of authority to mandate that a certain amount of water flow to farms and municipalities.

Donald Trump has been very vocal on the campaign trail in relation to immigration issues. During the campaign, he vowed to build a wall across our border with Mexico and begin to deport undocumented immigrants in our country. However, while agricultural interests may support Trump’s talk on pumping in the Delta, they may not be as supportive of the realities of Trump’s immigration policies.

While some of America’s farming operations are mechanized, the reality is that many farming operations are very labor intensive. According to the National Council of Farm Cooperatives, roughly 1.4 million undocumented immigrants work on US farms each year, representing approximately 60% of the agricultural labor force. The US Department of Homeland Security has a temporary visa program for agricultural workers, but farmers argue that the program is too cumbersome and the regulatory red tape does not allow enough workers through the program to meet the labor demand. As such, farmers argue that they have little choice but to hire undocumented workers currently in the US. If Donald Trump is successful in deporting significant numbers of undocumented immigrants in the country, it could limit the workforce for the agricultural industry and have negative ramifications on labor-intensive farming operations.

Donald Trump’s stance on foreign trade also will likely affect the agricultural industry, where some crops rely heavily on foreign buyers. We often hear that states such as California are the “bread basket of the nation,” but in reality, we are the bread basket of the world. Increases in demand abroad for consumer-oriented products have increased dramatically over the last decade. According to the US Department of Agriculture Economic Research Service, US exports of tree nuts have increased from approximately $1.8 billion in 1995 to $7.5 billion in 2013. In 2014 alone, California exported about 70% of its almonds, worth $4.5 billion. The top exporting countries included Spain, China, Hong Kong, Germany, India, the United Arab Emirates, Japan, South Korea, Italy, Turkey and the Netherlands. China is the United States’ largest destination of US agricultural exports, purchasing $25.5 billion worth of goods. Canada is our second largest destination for ag exports with $21.3 billion, followed by Mexico with $18.1 billion. 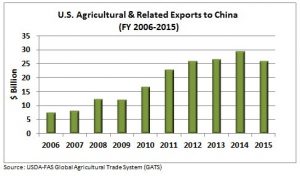 Donald Trump spent much time on the campaign trail and during the debates blasting both the North American Free Trade Agreement (NAFTA, which President Bill Clinton implemented) and the proposed Trans-Pacific Partnership (TPP), a trade deal between the United States and a host of Asian countries including China and Japan. If Trump follows through on his campaign promise, the repeal of NAFTA and the death of the TPP could have impacts on the agricultural industry. For trade in North America, NAFTA lowers or eliminates tariffs on a wide variety of goods crossing the border in both directions between the US, Mexico and Canada. If Donald Trump were to repeal NAFTA, tariffs for goods coming into the US from Mexico and Canada would raise. Consequently, it is likely that Canada and Mexico would raise similar tariffs in response to the NAFTA repeal, hurting agricultural exports to these countries. The death of the TPP would have potentially negative repercussions on agriculture exports to Asia as well. According to the USDA Foreign Agriculture Service, the TPP would eliminate tariffs on all tree nuts, fresh and processed fruits exported from the US to Japan, Malaysia and Vietnam. With no passage of the TPP, agricultural exporters will still have to pay tariffs for goods going into these countries.

It will be interesting to see how President Trump navigates the first 100 days while he is in office. While his campaign often featured blustery and headline-grabbing remarks, the issues at hand that he campaigned vigorously for are much more complicated than the sound bites on the news networks make them out to be. For environmental policy, particularly related to the Delta, it is easy to get a crowd interested in seeing more water deliveries behind you by saying that you will tear down regulations that make more water deliveries prohibitive. The reality is that a series of governmental agencies including those that he has no control over ultimately provide input and create the guidelines that govern how much water flows to farmers and cities in California. In terms of immigration and trade, there are arguments to be made that trade deals hurt the American middle class and caused some of the economic pain and suffering in our industrial heartland. But like any other complicated issue, there are both pros and cons to the program. Further, unlike “The Apprentice” where he had sole authority to hire and “fire” contestants, he will now have to navigate through 435 members of the House, 100 Senators and thousands of government bureaucrats to implement policy. Only time will tell if the policies he implements mirror anything close to his campaign promises.