The use of eminent domain across the world can often be a contentious process regardless of what property is being taken. In China, the City of Beijing evicted an estimated 1.5 million people from their homes in the city to make way for the buildings and infrastructure needed for the Olympics. In some instances, the citizens were not justly compensated, and developers would take drastic steps to force unwilling residents to move from their properties. In the City of Kunming, an elderly 83 year-old woman refused to vacate her property after her neighborhood was slated for development. To drive her out, the developer leveled all of the properties around her home, cut electricity and dug a two meter deep mote around her house. Yikes. 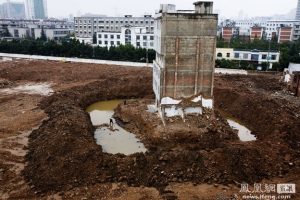 In the United States, we have a more orderly process of eminent domain, but contentious cases often end up in court. The US Supreme Court decided a landmark case entitled Kelo v. New London in 2005 which concluded that the City of New London’s eminent domain proceedings to take private property for private development did not violate the Fifth Amendment. In this instance, a city used its eminent domain authority to take private property to sell for private development. But what happens when a city uses its eminent domain authority to attempt to take over a private company for public benefit? Such cases are working through various stages of litigation in the Town of Apple Valley as it looks to purchase the private water company that serves the town through eminent domain. The November election had two ballot measures related to the financing of the water system takeover, should the Town of Apple Valley receive approvals to proceed. Despite initial momentum in the town to take over their respective water systems, a change in citizen sentiment towards the takeover have shifted the dynamics of the process. In this post, I will provide an overview of the proceedings in the case and what the future may bring for each water system. In my next post, I will discuss the challenges to a successful eminent domain proceeding and the complications that may arise during the process.

The Town of Apple Valley is a municipality of approximately 71,000 in the High Desert of San Bernardino County. Since 1945, the Apple Valley Ranchos Water Company, a private utility has provided water service to the citizens and businesses of the town. The parent company, Park Water, owned assets including Apple Valley Ranchos, and water utilities in parts of South Central Los Angeles and Missoula, Montana. In early 2016, Liberty Utilities finalized the purchase of Park Water’s system. However, by that time, the town had already begun the process to take over the company by eminent domain.

A few factors played into the town’s original decision to pursue an eminent domain proceeding. First, the town argued that the Town Council and citizens have no local control over the rates that Apple Valley Ranchos charges customers. Much like the private electrical utilities in the state, the California Public Utilities Commission (CPUC) sets the rates for Apple Valley Ranchos. While other surrounding cities such as Hesperia and Victorville which have public water utilities kept water rates relatively stable, the private water companies in the area began increasing rates in 2011. A 2015 audit report from California State Auditor Elaine Howle concluded that, between January 2011 and June 2014, Apple Valley Ranchos and Golden State Water Company (a private utility which serves areas surrounding Apple Valley and the City of Barstow) increased rates by 16 and 18 percent respectively. In 2014, the utility also made a request to the CPUC for a 30% rate increase over three years between 2015 and 2017. The audit report also found that on average between 2011 and 2013, Apple Valley Ranchos’ per-connection cost was approximately $300 higher than Victorville Water District’s charges and $400 higher than Hesperia Water District’s costs. 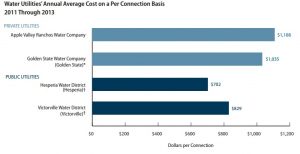 More rate increases came in 2015 in response to the unprecedented drought. As a result of Governor Jerry Brown’s mandatory 25% water conservation measures, Apple Valley Ranchos (as did many other districts) added a drought surcharge to make up for lost revenues as a result of lower water sales. The company eliminated the drought surcharge in November 2015.  But by this time, some citizens in the town were frustrated with a private water company having control over water rates. They argued that the town had no local control over rate decisions because the CPUC, headquartered in San Francisco, has authority to approve rate cases for Ranchos. Further, they argued that the Town of Apple Valley theoretically could provide a less expensive service. As a private company, Ranchos pays taxes and needs to create a return for investors. In 2014, Ranchos made about an 8.64% return on investment. If Apple Valley owned the system, it would not have to pay taxes nor would it need to make a return for investors. For these reasons, town officials and the town council put plans in motion to attempt to acquire the system by eminent domain.

In late 2014, after the CPUC granted Ranchos’ request for increased water rates, the town began to take steps to acquire the system. In March 2015, the town released its appraised value of the Ranchos water system, estimating its value at $50,300,000 using a number of valuation methods. During that time, the ownership of Apple Valley Ranchos also changed hands. The Carlyle Group sold Park Water (the parent company of Apple Valley Ranchos and the assets in Los Angeles and Missoula) to Liberty Utilities. At the time, Apple Valley expressed interest in purchasing the Ranchos assets from Carlyle during the sale. Carlyle rebuffed Apple Valley’s attempts, arguing that they planned to sell the assets as a whole, not in pieces. To make matters even muddier, at in March 2015, the City of Missoula began eminent domain proceedings in Montana to secure its portion of the water assets that were being transferred to Liberty Utilities. The eminent domain trial began in March, and a valuation proceeding for the Missoula assets took place in May. In April 2016, the Montana Supreme Court granted Missoula a preliminary order of condemnation to acquire its water system. (Note that the Montana and California have different laws governing eminent domain proceedings and different courts deciding the cases. So while the cases in Missoula and Apple Valley are similar, the process to acquire assets through eminent domain and the time it takes to move through the courts are different.)

Emboldened by the success that Missoula had, Apple Valley began its own eminent domain proceedings. In November 2015, the Town Council passed a notice of determination and resolution of necessity to begin the acquisition process through eminent domain. At the Council meeting, Mayor Barb Stanton quoted polling conducted in July 2015 which found that 70% of Apple Valley Ranchos ratepayers supported acquisition. Mayor Stanton said, “Apple Valley’s acquisition of our water resources puts it in the people’s hands. Our community has a right to own this life-giving resource.” However, since then, the public opinion towards the acquisition and their appetite to pay the costs associated with the eminent domain process and the subsequent debt associated with the purchase has waned.

What caused public sentiment to change? How did Apple Valley go from 70% support of acquisition in 2015 to the passage of a ballot measure in 2016 that mandates a town-wide vote when the town will issue more than $10 million in debt (a threshold that will surely be crossed if the town is successful in its eminent domain proceedings)? I will address these issues in my next post.