Looking at the current reservoir conditions from the California Data Exchange Center, it is clear to see that the conditions in California are much different than from a year ago. Nine of the state’s major reservoirs that serve both the Central Valley and State Water Projects have over 100% of their historic averages for this date. The state’s two largest reservoirs, Lake Shasta and Lake Oroville are at 96% and 84% full respectively. The San Francisco Chronicle published a series of before and after photos of reservoirs in the state to show the stunning change in hydrologic conditions in just one year. For example, in August 2016, the San Luis Reservoir outside of Los Banos was at 10% of capacity. Fast forward to today, and the reservoir is completely full. The much-improved hydrologic conditions prompted Governor Jerry Brown on April 7th to issue an executive order that lifts the drought emergency in all California counties except Kings, Tulare, Fresno and Tuolumne. The drought emergency he rescinded had been in place since April 25, 2014. 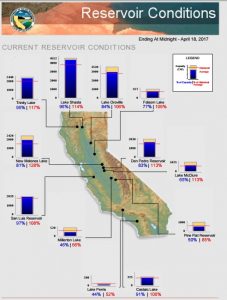 Considering the much-improved hydrologic conditions, deep snowpack and full reservoirs, many Central Valley Project contractors hoped and expected to receive a full allocation from the US Bureau of Reclamation. On March 22nd when the USBR released its initial allocations, it announced that north-of-Delta and in-Delta contractors would receive 100% allocations. However, south-of-Delta contractors would only receive a 65% allocation. The south-of-Delta contractors are still smarting from the 2014 and 2015 allocations from the CVP when they received zero percent in both years. Seventeen water districts and the City of Fresno went so far as to file a $350 million lawsuit against the Friant Division of the US Bureau of Reclamation for delivering no water in 2014, despite the plaintiffs’ claim that there was enough water in Millerton Lake to provide them with at least something. Considering this year’s abundance of water resources, many end users were not happy with the initial allocation. California Farm Bureau President Paul Wenger said of the initial allocation announcement, “In the alternate universe of California water, we can have floods, full reservoirs and a huge snowpack and still not have full water supplies. It boggles the mind.”

In a somewhat sigh of relief for drought-weary farmers, the US Bureau of Reclamation issued a 100% allocation for south-of-Delta contractors on April 11th. While famers welcomed the Bureau’s decision, they were also concerned that they would not be able to take full advantage of the abundant water resources available this year. The Sacramento Bee reported that farmers had to make decisions on planting months prior to the final allocation, and as such had to plan for lower water allocations. Jerry Armal, Deputy General Manager of the Westlands Water District said, “You don’t want to bite the hand that feeds you, but it’s a reality of farming that the decisions for the growing season are made months ago. There’s reason to celebrate, but my only hope is that we could have had this announcement earlier.”

The Central Valley Project is the US Bureau of Reclamation’s storage and delivery system for federal water in California. At a 100% allocation, the project can theoretically deliver 9.5 million acre-feet of water to its contractors (click here for a full list of divisions and contractors). The Project delivers water from multiple reservoirs and watersheds including from the Sacramento, Trinity, American, San Joaquin and Stanislaus Rivers just to name a few. Each contractor has an assigned division and receives water from the river or reservoir that serves it. In addition, while the US Bureau of Reclamation manages the Central Valley Project under one umbrella, in practice the system is a series of divisions that are not necessarily interconnected. For example, the physical “plumbing” of the CVP may preclude a certain contractor getting water from another river or reservoir in emergencies or times of low water supply because there is not physical infrastructure to deliver the water directly.  Add in the challenges of moving water through the Delta, and the complexities of delivering water from places of abundance to places of need can become immense.

In the past few years, authors at Hydrowonk including myself have written a series of articles addressing how environmental regulations created pumping restrictions and limited water exports out of the Delta. In particular, regulations designed to protect the endangered Delta smelt and the Chinook salmon have in years past slowed down or stopped exports out of the Delta. This year, however, the significantly higher inflows into the Delta have allowed both federal and state pumps to run largely without interruption during the winter to take advantage of the opportunity. At a press conference to announce the initial CVP allocations, Operations Manager Ron Milligan said, “We’ve had a really good year as it relates to hydrology and the conditions. We’ve had very little constraints as it relates to operations for protecting listed or endangered species so that’s really not the limitation here.”

The graph below of the capacity in the San Luis Reservoir shows the success of the state and federal projects (Reclamation and the Department of Water Resources jointly manage San Luis) at delivering water south of the Delta. San Luis is an off-stream reservoir, so the only inflows that it receives are from imported water from northern California delivered through the Delta’s pumps. As the chart shows, around August 1, 2016, water levels in the reservoir stood at about 200,000 AF. Since then, the operators pumped approximately 1.8 million acre-feet into the reservoir to fill it completely in early March. Clearly, pumping restrictions through the Delta did not cause the below-100% initial allocation for the CVP. If pumping is not a limiting factor, what is? 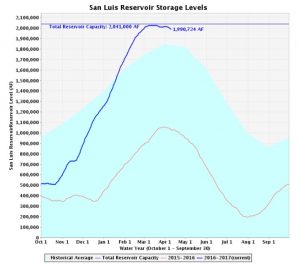 There are a few reasons why the USBR did not initially issue a 100% CVP allocation this year. First, CVP operators say that carryover water is taking up storage space that could otherwise be used for new supplies. Carryover water is water supply that a district does not use in a prior water year that can be stored within CVP reservoirs. Each contractor has a certain amount of “carryover capacity” negotiated in the contract that allows it to store up to that amount in CVP reservoirs, particularly in San Luis. The details of this program are too detailed for the constraints of this post, but generally this “carryover water” is subject to losses if the USBR needs the capacity. Many districts purchased carryover water in the past few years (in some instances at a substantial cost) to make up for unreliable (or in the case of 2014 and 2015, non-existent) CVP supplies. The Bakersfield Californian reports that districts with carryover water scrambled to store water in groundwater banks such as Semitropic or the Kern Water Bank, but the time it took to coordinate alternative storage and move this water out of San Luis hampered USBR’s efforts to deliver 2017 supplies. On the media call to address the initial allocation, CVP operator Ron Milligan also addressed this issue. He said, “There is a significant amount of water that is in San Luis Reservoir in the federal share that is earmarked from last year. That’s the equivalent in our estimation about 15% more of an allocation if that were actually allocate-able under the CVP’s label.”

Further, the initial CVP allocation was more conservative because operators must provide cold water for winter run Chinook salmon later in the season. The young salmon need water temperatures below a certain threshold to survive. In the last three years, low stream flows and storage levels caused water temperatures to rise above the threshold that is lethal to young salmon. To protect the imperiled species, the Pacific Marine Fisheries Council issued a series of alternatives in late March to limit the fishing season in fisheries where Sacramento River Chinook salmon migrate. The National Marine Fisheries Service (NMFS) is also looking to require that reservoir operators release less water in order to protect the cold water in the reservoirs for later in the season. This rule change would particularly affect Shasta Reservoir, the reservoir on the Sacramento River and the largest in the state. Increased storage in Shasta designated for temperature control means that there will be less water to deliver to CVP contractors that rely on the Sacramento River for supply. The initial 65% CVP allocation in part reflected the uncertainty of how much water will have to remain in storage in Shasta.

While the regulations are sorted out, the USBR again found itself in between two competing interests: water for the environment and water for human consumption. On the one hand, Ara Azhderian, water policy administrator for the San Luis & Delta-Mendota Water Authority said, “As a species that has lost two of the last three years’ breeding stocks, the rationale by NMFS is we must do really aggressive things to save the species from going extinct.” On the other hand, Glenn-Colusa Irrigation District General Manager Thaddeus Bettner said that the proposal would have far-reaching effects throughout the system. He said, “For us who divert water from the Sacramento River, this puts our diversions at risk. For folks south of the delta, that puts exports at risk. For the diverters and users on the American River who rely on Folsom Reservoir, that results in Folsom Reservoir being drawn down as well as Oroville. Because the systems are so integrally operated and connected, changing that one operation at Shasta just reverberates through the system and potentially causes negative effects.”

As you can see, there are a whole host of factors that go into determining an allocation for the Central Valley Project. A 100% allocation is not a guarantee just because reservoirs are full to the brim. By the same measure, the factors affecting the allocation are dynamic, and can increase allocations if the hydrologic conditions are favorable. In this instance, the US Bureau of Reclamation had to contend with both significant amounts of carryover water in the system as well as some uncertainty around the amount of water needed for the salmon fishery. However, the record snowpack, the overall health of surface water supplies as well as limited pumping restrictions through the Delta overrode the challenges. As such, the Bureau will be able to provide 100% of contracted supplies this year.