The exceptional rain in California and over much of the western United States this winter was both an asset and a liability to the state. Clearly the precipitation as both rain and snow helped to “bust the drought” in California, and in a very short period of time. As the most recent US Drought Monitor statistics show, at the start of the water year (September 27, 2016), 100% of the state was in some form of drought. Further, 42.8% of the state had either extreme or exceptional drought. Fast forward to today and the severity of the drought has completely turned around. Currently (see map below) 76.54% of the state has no drought conditions, and only 1.06% of the state’s land mass has severe drought. No areas of extreme or exceptional drought remain. Further, reservoirs across the western US have been the recipients of above-average flows. According to the US Bureau of Reclamation, the elevation of Lake Mead has increased from 1,075.23 feet in September 2016 to 1,087.08 feet as of April 10th. Finally, according to the California Data Exchange Center, 9 major California reservoirs in either the State Water Project or Central Valley Project systems currently have above 100% of average storage levels. 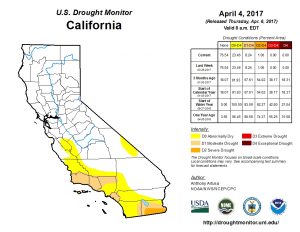 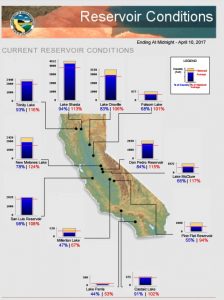 The relative abundance of water resources for the Golden State could continue for much of the year. As the table below shows, current snowpack surveys for every region show above-average totals. The weighted average of the regions’ snowpack is currently at 164% of the historical average. And while on average most of the state’s precipitation falls in between December and March, the Pacific coast was the recipient of another storm during the first weekend of April. The storm brought 1-2 inches of rain over the Sacramento and Upper San Joaquin valleys starting on Friday and going into the weekend. 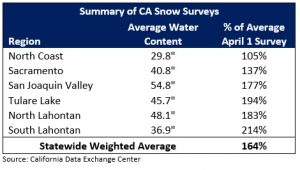 While all of the precipitation surely has alleviated the drought conditions and taken pressure off of tapped reservoirs and groundwater supplies, it has also put a clear focus on the challenges California’s aging water infrastructure faces. While the emergency at Lake Oroville received the most national media attention, there were instances of strained water and flood infrastructure across the state. On February 14th, President Donald Trump approved a major disaster declaration and granted FEMA assistance to 34 counties where flooding caused severe damage. At a press conference to announce the FEMA package, White House Press Secretary Sean Spicer said of the Oroville Dam emergency, “The situation is a textbook example of why we need to pursue a major infrastructure package in Congress. Dams, bridges, roads and all ports around the country have fallen into disrepair. In order to prevent the next disaster, we will pursue the President’s vision for an overhaul of our nation’s crumbling infrastructure.”

This winter’s toll on California’s water infrastructure has shown that at some point, we will need to make the necessary improvements to keep the public safe and ensure reliable water supplies in all hydrologic conditions. Also in light of the last five years of drought, we need more reliable water storage infrastructure to get our state through low precipitation years. However, our politicians disagree on how to implement a potential infrastructure package. President Trump has, through multiple venues, expressed his intention to streamline the infrastructure approval process. In addition, Transportation Secretary Chao noted that Trump plans to unveil a $1 trillion infrastructure program in May.  Opponents of Trump’s rollback of some environmental regulations, however, are concerned that new infrastructure could come at the cost of the environment. I will explain in more detail some of the obstacles facing Trump’s infrastructure plans.

Mother Nature blessed California with abundant rain and snowfall last winter, but the precipitation also highlighted the deficiencies in the state’s water infrastructure. Besides the Oroville spillway emergency, there were a host of other damaged water infrastructure across the state. In San Jose’s Rock Springs neighborhood, approximately 14,000 residents had to evacuate because the flood control channels were not sized large enough to handle the flow of the storms that hit the area. In Corcoran, crews are scrambling to increase the height of key levees around the city. Flood control officials fear that the coming snowmelt will overwhelm the area’s flood control capacity and potentially cause flooding. The City of Corcoran is built on the former Tulare Lake Bed (which was drained over 100 years ago to make way for farming operations) and is prone to flooding in instances where the Kings, Kaweah, Tule and Kern Rivers receive significant snowmelt. Finally, in March, the State Water Project had to suspend pumping operations when it found that the Clifton Court Forebay’s intake structure sustained damage. The likely culprit according to State officials? Excessive use this winter. Jay Lund, Director of the Center for Watershed Sciences at UC Davis said, “They were pumping water at a higher rate than even what the pumps are rated for in my old blue book of the State Water Project.”

Some of these wounds to our water infrastructure were unfortunately self-inflicted. The levees in Corcoran have to increase in height because land subsidence (caused by excessive groundwater pumping) has lowered the original flood control infrastructure. The flood control district is currently paying the contractors fixing the levees with “IOUs” as it determines how it will pay for the improvements. In San Jose, the US Army Corps of Engineers in 2003 decided not to spend approximately $7.4 million on flood control improvements because in its assessment at the time, the Corps assumed that the economic losses related to flood damage would be less than the cost of the improvements. When the Corps made this decision, the Army Corps’ District Commander Lt. Colonel Michael McCormick said, “The economic evaluation found the benefits, i.e. the reduction in flood control damages, were not significant enough to justify the cost of improvements.” Initial estimates put the property damage at $100 million and emergency improvements necessary at $22 million. These figures are more than 17 times the Army Corps’ original estimate of improvement costs.

These examples show that it is clear we need to upgrade and improve our water infrastructure. Funding from the federal government could go a long way toward meeting California’s needs. But can enough common ground in Washington DC be found to support an infrastructure bill such as the one President Trump is proposing?

If the challenges to getting President Trump’s Obama Care repeal is any indicator, the new President may face some difficulties getting the rest of his agenda pushed through Congress. At a press conference on April 4th, President Trump showed the press a 7-foot long flow chart that highlighted the tangle of federal and state regulations to get a highway project approved. He announced that he would be using this as a starting point to cut government red tape to streamline projects and get them built faster. He also will push for more ways to entice private investment into infrastructure projects in order to reduce the cost burden on American taxpayers. His plans unfortunately do not have universal support.

Opponents of President Trump’s plans worry that his objective to reduce government regulations will harm the environment by not allowing a rigorous review of the environmental impacts of new infrastructure. Groups point to his actions early in his tenure to push oil and gas projects through the review process. For example, despite the objections of environmental groups and the Standing Rock Sioux Tribe about potential water quality problems, President Trump issued an Executive Memorandum just four days after his inauguration directing the US Army Corps of Engineers to issue the Dakota Access Pipeline the final permits it needed to complete the pipeline. Trump’s decision halted the preparation of an environmental impact statement (EIS) that the Obama Administration required before the issuance of a final permit. Further, ranking Democrats are concerned that new regulatory streamlining and cuts will confuse the progress that Congress is already trying to make to streamline the process. Ranking Democratic Transportation Committee Member Representative Peter DeFazio of Oregon said that Congress passed 2 bills in 2012 and 2015 to streamline regulations. A report from the Inspector General said that the majority of these streamlining recommendations had been completed but not implemented, because the 2015 legislation had conflicting provisions to the 2012 law. Finally, both Democrats and Republicans disagree as to how the proposed $1 trillion package should be funded.

Meanwhile, the delays and discord in Washington, D.C. can have very real consequences on the health and safety of our citizens. For example, the Department of Water Resources is working around-the-clock on fixing Lake Oroville’s damaged spillway. However, a five member expert panel said in a report for federal officials on the operation of the dam that there could be some extremely serious consequences if the construction was not complete by November. The panel concluded, “This is a very demanding schedule, as everyone recognizes. There seems to be no room anywhere to expand any part of the schedule. A very significant risk would be incurred if the gated spillway is not operational by November 1.” Emergency repairs to infrastructure are an unavoidable expense, but deferred maintenance and imprudent planning can only exacerbate the problem. As we saw in the case of San Jose, damages can be many times what the original cost estimates were. As we saw in the Oroville Dam emergency, unforeseen repairs can put crews on razor-thin schedules with very real consequences if they don’t deliver the repairs on-time. Spending upwards of $1 trillion on anything is a huge endeavor and should be debated and considered carefully. However, there are consequences to delaying action and completing necessary repairs and upgrades. Time is not a friend of any infrastructure project, and delays only add to the overall cost. It is my hope that members of Congress on both sides of the aisle can find some common ground and pass a sensible infrastructure bill that will put more Americans to work, invest in our aging infrastructure and hopefully avoid some of the unforeseen emergency repairs on aging infrastructure.