Relations between the United States and Mexico were of particular focus on Donald Trump’s presidential campaign. Whether discussing the border wall, revisions to NAFTA or drug enforcement policies, Mexico was a repeated and at times controversial topic of discussion. Strains over US-Mexico relations reached a focal point shortly after President Trump was inaugurated when Mexican President Enrique Peña Nieto cancelled a White House Visit scheduled for January 27th after President Trump demanded Mexico pay for the estimated $12-15 billion completion of the proposed border wall.

For the western United States, the relations between the United States and Mexico have another important significance: Mexico and the United States share the resources of key rivers, including the Rio Grande and Colorado. However, Minute 319, a key agreement that governs cooperation between the US and Mexico on the Colorado River, is set to expire at the end of 2017. Stakeholders have been working on Minute 32x, the proposed successor agreement to Minute 319. At this point however, Minute 32x has not been ratified. A host of challenges including the change in administration, vacancies in key governmental posts and some ongoing concerns about the implications of the agreement have so far hampered the deal from getting completed. What are the key challenges to moving Minute 32x forward and what are the prospects that the agreement will get signed before the end of the year? I will address both of these issues in this post.

When we think of the Colorado River, we often think about the Grand Canyon and US cities that rely on it for water supplies such as Las Vegas, Phoenix and Los Angeles. However, Mexico is a key stakeholder in the Colorado River’s supplies, and the nation faces many of the same challenges as the states in the western US that rely on its bounty. According to the San Diego Union Tribune, the states in western Mexico that rely on the Colorado River faced many of the same drought conditions in the last few years as the western US. In July 2015, half of Baja California, Mexico faced long-term drought conditions. Border city Tijuana relies on supplies from the Colorado for about 95% of its water supplies. Agriculture in the Mexicali valley also uses the majority of the water supplies in the region. According to a 2010 Study from Duke University’s Center on Globalization, Governance and Competitiveness, irrigated agriculture in the Mexicali Valley used approximately 2 billion meters3 of water (approximately 1.62 million acre-feet) compared to 86 million meters3 (~70,000 AF) and 200 million meters3 (~162,000 AF) for urban consumption in the City of Mexicali and the entire Baja urban area respectively.

Despite a much-welcomed reversal of drought conditions across much of the Colorado River Basin (see the images below from the US Drought Monitor for a comparison of drought conditions between the beginning of the year and now), officials at the US Bureau of Reclamation are still wary about the long-term prospects of water supplies in Lake Mead. The Las Vegas Review Journal reports that in the most recent Lake Mead operational study, the Bureau is forecasting a 4-foot drop in the elevation of the reservoir in the next 18 months (as of June 1, Lake Mead had a 1081.56 foot elevation). The April operational study projected that Lake Mead would end the same 18-month period at a 21-foot higher elevation, a much different outcome than currently predicted. The culprit is decreased projected runoff from mountain snow. The April report assumed that runoff this spring would be 30% higher than average; new projections, however, estimate that runoff levels will be about 16% higher than normal. While admittedly it is more difficult to predict elevation forecasts 18 months out, the change in forecast is something that policymakers on both sides of the border will have to keep an eye on. 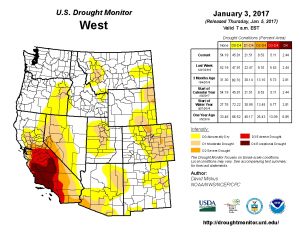 The United States and Mexico have had a treaty governing the use of the Colorado and Rio Grande Rivers since before the end of World War II. On February 3, 1944, the US and Mexico signed a treaty entitled Utilization of Waters of the Colorado and Tijuana Rivers and of the Rio Grande. The treaty, among others spelled out that Mexico will receive 1.5 million acre-feet of water annually from the Colorado River. It also authorized the International Boundary and Water Committee (IBWC) to create rules and decisions (called “minutes”) regarding the Treaty’s execution and interpretation.

Minute 319 is one such agreement, signed on November 20, 2012 and in force for a period of five years. A few key events led to the creation of Minute 319. First, in April 2010, a powerful 7.2 magnitude earthquake struck parts of Baja, Mexico and southern California. The earthquake caused widespread damage to the irrigation system in the Mexicali Valley, causing the Mexican government to request a temporary storage agreement to keep some of Mexico’s water allocation in Lake Mead. The discussions culminated in the creation of Minute 318 in December 2010. Next, the water levels in Lake Mead remained in almost continual decline from the late 1990s. More water was being taken out of the system than was naturally recharging, and the rate of decline reached a point where water officials feared reservoir levels would trigger water cutbacks. Finally, for decades, the Colorado River did not reach the Sea of Cortez because all of the river’s water was diverted off before it reached the sea. In this context, the US and Mexico began discussions to address these issues, which were codified in Minute 319.

(Note: For a detailed history of the negotiations leading up to Minute 319, please see the article from the Environmental Defense Fund here.)

The initial response to Minute 319 was positive. At the signing ceremony, then Secretary of the Interior Ken Salazar said, “The Colorado River is the lifeblood of local communities from the peaks of Rocky Mountain National Park to the mouth at the Sea of Cortez, supplying water for millions of Americans, irrigating our farms, and helping to power our cities and towns. The Department of the Interior recognizes the many challenges facing the Colorado River, and this binational agreement demonstrates our shared commitment to cooperation and partnership to protect and promote its future.” Residents of Mexico also were happy with the outcome of the negotiations. On March 23, 2014, the gates of the Morelos Dam were opened. For a period of 8 weeks, the water releases created a “pulse flow” of 105,392 acre-feet which allowed the Colorado River again to flow to the Sea of Cortez and emulate the natural springtime flood flows. However, Minute 319 with its 5-year term was designed to be a temporary measure while a more permanent minute (Minute 32x) was negotiated. At the time of publishing this post, negotiations remain ongoing.

Knowing that Minute 319 will expire at the end of 2017, the IBWC began working on Minute 32x in 2015, with the goal to sign a new agreement by the end of 2016. According to the ICBW, the Minute Negotiating Group began monthly meetings and were broken up into three working groups: salinity, projects and environment. The main issues that each working group addressed included:

Considering the momentum that the US and Mexico had regarding the negotiations for Minute 32x, why has an agreement not yet been made? There are a few reasons for the delay. First, as I mentioned in my last post, the Lower Basin states have not agreed upon the Drought Contingency Plan, an integral component of the operation of the Colorado River. As such, stakeholders in the United States believe that this plan must be agreed to before Minute 32x can be completed. A change in administration has also slowed the negotiations of Minute 32x. In her last day in office, outgoing Interior Secretary Sally Jewell issued Secretarial Order No. 3344 to urge Interior staff and the incoming administration to continue work on Minute 32x. On March 1st, the US Senate confirmed Montana Representative Ryan Zinke as Interior Secretary. However, as of this date, the Commissioner of Reclamation remains vacant in the Trump administration.  This position would play a key role in working with the ICBW, and the vacancy is hampering further movement on the new Minute. The Trump Administration has considered nominating Former Deputy Assistant Secretary of the Interior (under George W. Bush) Brenda Berman as Reclamation Commissioner, but so far, nothing has been finalized. Finally, politics may be playing into the lack of progress on Minute 32x. Former Interior Assistant Secretary Anne Castle said that the agreement should be able to stand on its own, but she is concerned that it has become “a negotiating point” between Mexico and the US due to the strained relations over issues such as immigration and NAFTA.

On June 18, the US State Department announced the approval of a presidential permit to build a cross-border pipeline. The pipeline is intended to bring water from a proposed desalination facility in Rosarito Beach, Mexico to the Otay Water District in southern San Diego County. Although the plant has not yet been built, if it is completed (the projected delivery date for the first phase is 2019 and phase II in 2024), the plant could deliver up to 100 million gallons per day to end users. This example shows that, despite some of the headlines to the contrary, US and Mexico are still working collaboratively on solving the water challenges that both nations face on the Colorado River. Further, many of those involved in the negotiations regarding Minute 32x remain confident that a deal can be reached. It is in the best interest of both the US and Mexico to find common ground and work collaboratively to manage the Colorado River’s supply, and hopefully minute 32x will come to fruition in the second half of the year.