The COVID-19 pandemic is (hopefully) once in a lifetime disrupter of our lives.  The public health establishment has been shattered and is being rebuilt on the fly.  The economy is in shambles.  We are learning about supply chains and interconnectedness of economic activity.  Who is immune?  No one.

Hydrowonk’s COVID-19 trilogy shares reflections on the pandemic’s implications for the water industry’s historic economic model, the role of science, and planning.  I confess that very few of these ideas were constantly on my mind until recently, although some were simmering.

Water is essential for humans.  Water is the foundation of local economies.  Without water, there is no life.  All true.

Given water’s essential nature, the water industry was built on a key presumption:

the inevitability of water demand 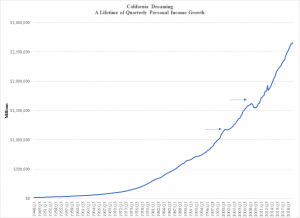 California’s economy is “clearly” a juggernaut.  Past being prelude to future, the golden era of California will continue as far as the eye can see (see figure).  How many planning studies of the water industry are based on this projected future?  Hydrowonk has had occasion to review numerous public agency infrastructure planning/water management studies and private sector pitchbooks for capital investments.  All assumed the inevitability of water demand.  Based on the historic record, what possibly could go wrong?  Groupthink?

COVID-19 has shattered the water industry’s economic model.  Rapid joblessness and burgeoning food lines bring back visions of the Great Depression, where the U.S. economy (measured by inflation-adjusted Gross Domestic Product) contracted by 26% over four years.  The U.S. economy did not fully recover to pre-Depression levels until the end of the 1930s.  Economic historians believe it took World War II to put our country’s economy back on its feet!

The COVID-19 shutdown of the economy makes the Great Depression look like child’s play.  Joblessness is exploding on an exponential curve like a virus (see figure), making the rate of job loss during the early part of the Great Depression look less exceptional.  With businesses (large and more importantly small) on the verge of collapse, joblessness may very well accelerate as COVID-19 “peaks”. 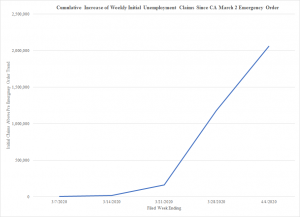 Hydrowonk hopes to be wrong, but finds unconvincing pundit talk about “v shaped” or even “u-shaped” recovery from a reopening of the economy.  Hydrowonk thinks more in terms of a “tilted L.” 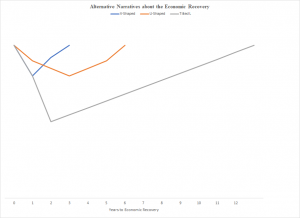 The economy is on the road to credit defaults and bankruptcy.  Hydrowonk is getting daily calls about whether valuable water rights can be profitably extracted from the wave of anticipated bankruptcies.  Key industry players and the capital market all want to gaze into my crystal ball.

The shutdown of the economy was admittedly essential for public health but will be consequential for the long-term health of the U.S. economy.  Hydrowonk is skeptical that millions of workers laid off can be rapidly integrated back into their previous jobs.  With businesses closing, millions of the unemployed will be chasing job opportunities disappearing into bankruptcy.

Anyone watching press conferences by the President and governors has learned more than they care to know about supply chains and the interconnectedness of economic activity, domestically and internationally.

Suppose a business is in an area of the country that “reopens”.  What does this mean?  Assume that the business is not in bankruptcy, still has adequate working capital and employees have not been evicted or have their homes foreclosed.  Where are the firm’s materials sourced?  Across the street or from an area of the United States or another country not yet reopened?  Even if goods can be produced, who are the customers?  Have they reopened?  Daily news is a running tutorial on the complexity and fragility of the supply chain.  A reopening occurring through the working out of credit defaults and bankruptcy just adds a layer of complexity and delay.  Given the interdependencies of economies, the U.S. recovery will drive and depend on the recovery of the world economy.

A “smooth” reopening looks like a slick, downhill/sidehill putt breaking to the right on the 9th hole at Augusta.  Take the putter back gently, slowly, and smoothly and, “for the love of God, don’t jab at it or look up!” (channeling David Feherty).

Compare three visions (two nightmares?) about California’s economic future.  (Austin Power’s) Dr. Evil predicts that the COVID-19 disruption will be twice as severe and “only” take one-more year to reach bottom than the Great Depression, but the economy will not recover to the 2019 Groupthink trend until the mid-2030s.  Even if the COVID-19 disruption “just proves” to be another Great Depression, California’s economic future is a great departure from 2019 Groupthink. 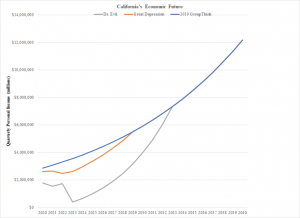 Why will the COVID-19 disruption prove more rapid and severe?  The Great Depression was started by a trade war followed by the Dust Bowl then exasperated by a succession of misfires in fiscal policy (raised tax rates) and monetary policy (the Federal Reserve Bank reduced the money supply by one-third).  The COVID-19 disruption was a rapid and much larger shutdown of the economy that is not easily reversible (see above).  One does hope that fiscal and monetary policy facilitates recovery.  Will adding trillions in federal debt monthly to pay short-term bills of an army of all worthy groups and putting an extra $8 trillion in the hands of the Federal Reserve Bank to provide liquidity do the trick?  Financial interests and corporations will undoubtedly fare better than small businesses, backbone of the US economy.  The US recovery will not be completed until today’s destruction of small businesses is relegated to economic history textbooks.

Water demand is not inevitable.  Like any other industry, the water industry is linked to economic conditions.  The water industry has taken its customers for granted for decades.  The post-World War II economic boom understandably lulled the industry.  With COVID-19, “the chickens have come home to roost.”

What industry takes its customers for granted?  Other than the water industry, Hydrowonk cannot think of one.

Hydrowonk started his career on petroleum and natural gas matters before specializing in water.  Every major petroleum firm has an economics group headed by a Chief Economist in the C Suite.  Some of their staff work involved routine running economic forecast models straight-lining recent historic experience (useless then and especially now).  But Chief Economists also engaged in strategic analysis of the technological, economic and policy factors that could shape and even rapidly transform market conditions in the short and long run.  Responsible for pulling the trigger on investing billions in long-lived assets, Chief Economists were curious about and responsible for identifying, understanding and managing the risks they were betting on.

Economic curiosity extended to sector cooperation through trade associations.  The American Petroleum Institute (the major trade association) and other trade groups have their own economics group.  Committees are formed to jointly investigate critical issues.  Group meetings involved debate among competing views to sharpen the understanding of the future and the consequences of alternatives.  The “competition of ideas” leads to industry consensus on how to address vexing problems with regulators.

The U.S. Department of Energy’s has the U.S. Energy Information Administration, whose mission is “responsible for collecting, analyzing, and dissemination energy information to promote sound policymaking, efficient markets, and public understanding of energy and its interaction with the economy and the environment.”

Compare the water industry.  Hydrowonk is unaware of any public water agency or private water utility that has comparable economic expertise.  What about trade associations.  Nope.  State departments of water resources.  Nope.  Bureau of Reclamation.  Nope.

The COVID-19 disruption will require the water industry to change.  Water demand will collapse.  Hydrowonk conducted a comprehensive economic study of Southern California’s wholesale water demands a few years ago.  Water sales grew at 95% of the rate of growth of the Southern California economy.  Projects and investments justified by 2019 Groupthink are in trouble.  The Water Industry will have its own problems to work out.

Water providers’ cash crunch may not be temporary.  Governor Newsom’s order does state:

While Governor Newsom’s order is tied to his earlier state of emergency declaration on March 2nd, who knows how policy will evolve so that all Californians have water available.

Presumptions of full repayment with late fees and interest may prove politically naïve.

The COVID-19 economic collapse will change the capital market’s view towards municipal water investment.  Try going to market with widespread collection problems and collapsing demand.  Wall Street—which was already starting to “catch on” to lower demands and higher rates—will tune up their economic analysis of the water industry.

The water industry may find their lender of last resort, the taxpayer, tapped out.  With local and state tax bases collapsing, all roads lead to Washington DC.  Can the water industry become part of the trillion-dollar lottery funding the economic recovery?  Time will tell.  Will former President Obama remind President Trump that there are no “shovel ready” infrastructure jobs.  Will President Trump bet on his executive orders issued in his first year directing prompt federal environmental reviews?  Will litigation over federal environmental review slow the release of funds, which may be “reallocated” to promptly address the economic collapse?

Paraphrasing Rahm Emanuel, the water industry should not let the “COVID-19 crisis go to waste.”  It’s time for the industry to take seriously the economics of decision-making.  Abandon the projections of 2019 Groupthink in Urban Water Management Plans under preparation.  Suspend planning studies of new infrastructure projects until one has a better understanding of the COVID-19 economy.  Revisit the economics of existing investments.  Take a fresh look at financial reserve policy under the COVID-19 economy.  Revisit rates and rate structure in the face of the ability-to-pay challenges of your customers.  This is a full agenda.

The Water Industry could take a lead from the federal government’s management of the COVID-19 crisis.  Task forces should be formed at the federal, state and local level to work with trade associations to address the economic challenges facing the water industry.  It is time for real-time data to be collected, shared and analyzed.  How?  After discussing how COVID-19 has changed the role of science for the water industry in Part 2, see Part 3.