“The Salton Sea is a disaster in the making.  California isn’t doing anything about it,” states a Los Angeles Times Editorial.  The announcement of California’s 10-Year Plan was made with great fanfare in 2017.  Two years later, one-fifth into the 10-year plan, planned projects have not started.  Nothing has happened.  The environmental and public health tab from continued inaction compounds.

The long-term, sustained decline of the Salton Sea is a conundrum. Under the terms of the historic long-term water conservation and transfer agreement between the Imperial Irrigation District and the San Diego County Water Authority, the impact of the transfer through 2017 was fully mitigated.  As I reported in my earlier blog post, no one in the Salton Sea crowd has an explanation for the precipitous decline in the elevation of the Salton Sea.

The facts are stunning (data from U.S. Geological Survey).  The chart below shows daily average elevation for December, which provides a year-to-year comparison of elevation over time. 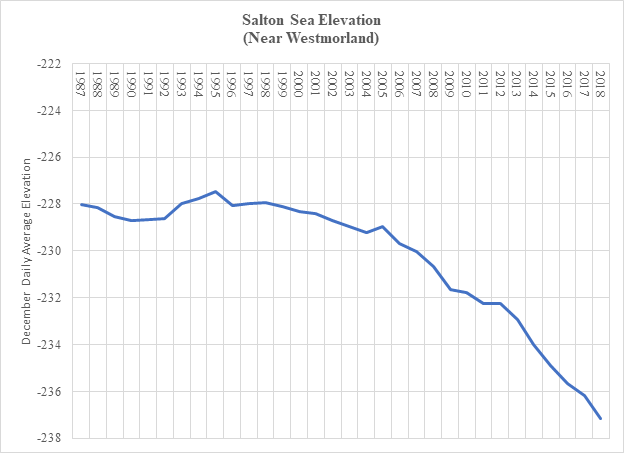 The variability of Salton Sea’s elevation around these trends is instructive (see chart).  For the USGS historic record 1987-2017, the variability of the actual Salton Sea elevation around trend ranges from a low of -0.5 foot to a high of +0.8 foot.  With the end of mitigation water being delivered into the Salton Sea in 2018, the deviation from trend declined to a historic low of -0.6 feet.  In other words, the actual decline in elevation was twice the trend decline since 2005 (trend decline of 0.6 feet plus a deviation below trend of 0.6 feet). 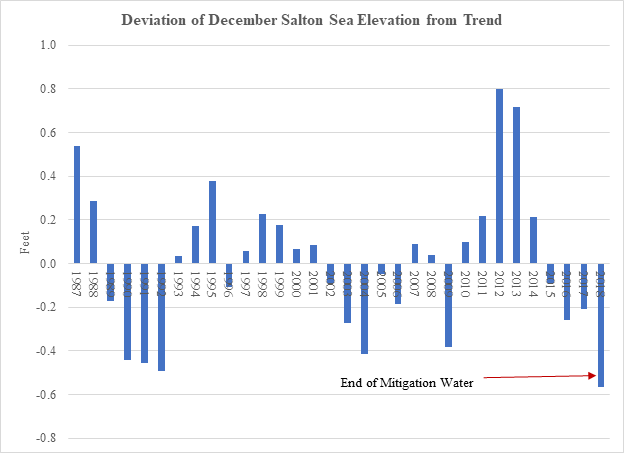 Does this signal an acceleration in the decline of the Salton Sea’s elevation?  From a statistical perspective, a new trend cannot be confirmed with one data point.  Another five to ten years of state inaction should provide enough data to provide a statistically valid estimate.  In the meantime, public health costs accumulate and environmental collapse marches on.

I asked two years ago,

[H]ow can a successful restoration plan be developed and implemented unless we understand the nature of the problem? . . . the “wisdom of the Salton Sea crowd” awaits development. Are reduced inflows from Mexico part of the explanation? Has conversion of lands in Imperial Valley from agriculture to solar significantly reduced inflows to the Salton Sea? To what extent have reductions in agricultural water use below IID’s Priority 3 entitlement (adjusted for transfers) significantly reduced Salton Sea inflows? Was the definition of the mitigation water obligation under the QSA or its implementation flawed? Should have IID’s water conservation agreement with the Metropolitan Water District of Southern California included a mitigation obligation? Are there other factors at work?

Understanding the causes of elevation trends is essential to discovering the Salton Sea’s future. Once we have a scientific framework for understanding how the Salton Sea evolves, we will have better assessment tools for developing and monitoring the success or failure of habitat and dust suppression programs. Unless we understand how to “bend the curve” on Salton Sea trends, our future will not be attractive.

Politics, policy and public spending disconnected from science and facts is destined for failure.  After two decades, is it time for those truly interested in addressing the Salton Sea to rethink their approach?

Hydrowonk is working on developing opportunities for binational cooperation on water resource matters, which include drought relief in the Colorado River Basin and restoration of the Salton Sea.