No.  DWR’s estimates of the statewide impact of the Bay Delta Conservation Plan are roughly equal to about one month of trend growth in state personal income and employment.  Other than perhaps the temporary jobs during construction of the BDCP conveyance facility, it will be difficult to measure the BDCP’s economic impact on the California economy.

The DWR study concludes that the BDCP will increase economic activity of California over fifty years by a present value of $83.5 billion and generate a total of about 1.1 million full-time jobs.  As with any long-term, multi-billion capital project, the numbers rack up quickly.  Let’s look at the numbers

The economic benefits of avoiding water shortages (“supply reliability”) account for the bulk (almost 90%) of the statewide economic impact (see table).  The economic benefit for urban water users is eleven times the benefit of agricultural water users.  The BDCP land acquisition and agricultural land retirement are a net negative ($2 billion).  The higher water rates and taxes generated by the BDCP cost the California economy $19 billion.

Source: compiled from Table 5.1-1 of Chapter 9A

A present value of $83.5 billion is a large number.  To put this number in perspective, I amortize this amount over 50 years at DWR’s real interest rate (3%).  The annualized value of the statewide economic impact is $3.25 billion (2012$).

The economic benefits of avoiding water shortages (“supply reliability”) also dominate the impact of the BDCP on statewide employment (see table).  In my opinion, the job estimates are inflated.  The job measure is full time equivalent jobs.  One job that lasts for an entire 10 year period is counted as 10 jobs in the table.  A temporary job (such as construction) that lasts for 4 years is counted as 4 jobs.  The more meaningful use of the information contained in the table would be to divide the numbers by 10 (for each 10-year period) to get the average annual rate of creation of full-time jobs.  The “cumulative” column is not meaningful.

Source: compiled from Table 5.2-1 of Chapter 9A

As with statewide income, avoiding water shortages is the job creator.  “Supply reliability” creates about 25,000 full-time equivalent jobs.  The job gains in urban areas is about three times the job gains in agricultural areas.

Placing the BDCP in Perspective

What do these economic impacts mean for the California economy?  Very little. 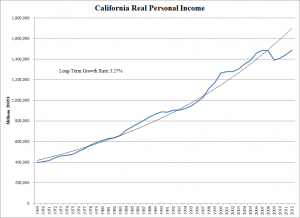 How does the economic impact of the BDCP compare to the California economy?  Adjusting the Department of Finance estimate for inflation from 2005 to 2012, California’s personal income in 2012$ would be about $1.8 trillion.  The BDCP permanently increasing annual income by $3.25 billion in annual income translates to a one-time increase of 0.18%.  With a trend growth rate of 3.27%, the impact of the BDCP represents 5.5% of annual growth (5.5% ≈ 0.18%/3.27%), or less than one month’s growth.

The impact of the BDCP on employment is similar.  The Bureau of Labor Statistics puts employment in California at 16.7 million at year-end 2012.  Over the time period shown in the chart below, the long-term growth in employment has been 1.55%.  Like California’s personal income, growth in employment since the economic downturn in 2008 has been below this trend line.  The “economic recovery” since 2009 has proceeded from a lower base and now growing at about the same rate. 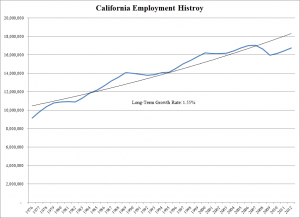 How does BDCP job creation compare to the California economy?  I take the long-term job creation during project operations where the annual full-time equivalent number of jobs is around 25,000.  This represents an increase of 0.15%.  With a trend growth rate of 1.55%, the BDCP job impact equals almost 10% of annual employment growth, or little more than a month’s growth.

While the BDCP economic impact numbers may look large initially, the impacts are actually small from a statewide perspective.  This does not mean, of course, that the BDCP is unimportant for everyone.  There are sector impacts, such as construction, engineering and planning that would be large in comparison to their size.  As such, the BDCP looks a bit like an “infrastructure economic stimulus project.”

The bulk of the benefits, of course, is avoiding water shortages.  Therefore, one should expect  larger impacts in the Central Valley and Southern California.  As a matter of arithmetic, the proportionate impact on these areas will be larger than statewide impacts.  While I have not done the analysis, I suspect that looking at the impacts on those regions will still show a relatively minor impact.  In other words, the BDCP is not a keystone even the water user local economies.

The modest impacts on California’s economy seem at odds with the BDCP narrative.  Fixing the Delta and improving water supply reliability is critical for California’s future.  Perhaps the “disjunction” between the narrative and DWR’s economic impact study simply reflects the fundamentals of the BDCP.  The BDCP is about increasing the supply of non-firm water supplies, not increasing the supply of reliable water.  Again, as I have mentioned in earlier posts, the missing link for supply reliability is storage.