Sometimes when we think of water resources, we assume that a particular state has control over its own supplies such as groundwater and river diversions. But what if a state must share water resources with other states and even other countries? In a time of severe drought as the Southwestern United States is currently facing, how states and nations share limited water resources becomes more complicated and contentious. In this two-part series, I will discuss how treaties and Texas’s negotiations between New Mexico and the country of Mexico have strained both relations and the limits of a scarce resource that each party needs. Let’s first discuss the challenges between Mexico and Texas.

While many questions remain as to how the Southwestern US will tackle the continuous drought, there is no question about its severity. The US Department of Agriculture’s Drought Monitor (please see the graphic below) shows the extent of the drought conditions that Texas faces. Over 64% of the land area in Texas is facing severe drought or worse, an increase from approximately 40% just a year ago. The drought in the Southwest has a real and significant impact on the economies and livelihoods of the people that call this region home. Farming is an important economic driver in Texas, and many areas face significantly lower yields and higher crop losses due to the drought. The May 1, 2013 issue of Texas A&M’s AgriLife Today estimates that crop losses will exceed $100 million in Texas in 2013. This figure is more than double the crop losses the state experienced in 2006, when the State again faced an extended drought and a lack of irrigation water from the Rio Grande River. Farmers will again face a very challenging growing season without greater water resources. 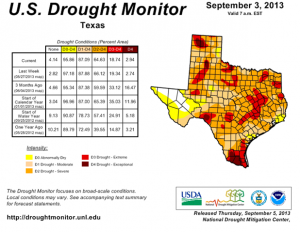 In the context of constrained resources, Texas, New Mexico and Mexico are struggling to secure as much water entitlement as they can, and it is causing strains between the parties along the River. For example, the United States signed a treaty with Mexico in 1944 that entitles the United States to one third of the Rio Conchos, a river in Mexico that connects into the Rio Grande just south of Presidio, Texas. According to a July 10, 2013 article in the Texas Observer, Mexico must release water that averages out to 350,000 acre feet over 5 years. However, the treaty does not specifically mandate that Mexico give the United States 350,000 acre feet each year; rather, it only mandates that the water it releases average to 350,000 acre feet over a five year period.

As such, Mexico has not released water from the Rio Conchos into the Rio Grande River, and farmers and communities that rely on the source are suffering. While Northern Mexico also faces the same drought conditions, farmers and communities along the River argue that Mexico should release more water to them. All the while, the lack of sufficient water resources from the Rio Grande River is putting even higher demands on other supplies in the State. Central Texas can rely on aquifers and lakes, though these resources have been stretched thin during the drought. The Panhandle of Texas has been draining its portion of the Ogallala Aquifer. As the State worries about where it will get new water supplies, the drought is leaving both farmers and businesses in a precarious position to try to plan for the future.

Further, the increase in oil extraction is a boon for the economy, but taxes the already slim water supplies that many areas of the State have. Texas is home to the Eagle Ford Shale, one of the most productive oil and gas formations in the United States. The region supplies energy produced in the United States, and the jobs and economic benefits that go along with it. However, drillers must use hydraulic fracturing or “fracking” to release the oil from formations deep underground. The process requires significant amounts of water, in some cases up to 500,000 gallons of water to begin the production of one well. The Energy information Administration estimates that fracking currently uses between 10 and 25 percent of the water in Texas. As more and more wells come online, the practice will put further strains on the State’s resources.

When the severe drought in the Southwestern US will abate is anyone’s guess. Until then, Texas must delicately manage the limited water resources it has to limit the economic and human ramifications that the drought has on the State’s people and economy. Stay tuned next week for a continued discussion on how the drought is affecting New Mexico and its dealings with Texas.