There is a significant “risk factor” about the Bay Delta Conservation Plan that merits attention:

What would be California’s Water Supply situation without the tunnels?

Over the past couple of weeks, I have heard about alternatives to the no BDCP scenario defined by DWR.  What proves true will have a substantial impact on the cost of BDCP water.  Under alternative “no tunnel” scenarios, the best case for the cost of BDCP water would be well over $1,000/AF for a non-firm water supply.  There are some scenarios where the BDCP investment may yield even a lower water supply.  In those circumstances, the BDCP investment in tunnels would become the “bridge to nowhere” in waterworld.

Whatever one’s views about the BDCP, in the end we are rolling the dice on what is, in fact, the future world with and without the tunnels. 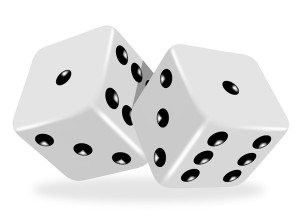 DWR’s approach is to compare regulatory restrictions imposed by state and federal wildlife agencies with and without the tunnels.  Sensible.  To carry out this approach, DWR consulted with the relevant regulatory agencies and used those agency’s predictions about future regulation in their analysis of water supplies with and without the BDCP.  Not a bad idea.  This analysis generates the estimated yield of the BDCP under alternative scenarios about Delta outflow (see table).

I suspect that everyone interested in the BDCP have memorized these numbers by now.

Jeffrey Michael at the University of Pacific notes that the “without the BDCP” water supply estimates are not consistent with the no action alternative in the Environmental Impact Report.  He summarizes the EIR as stating that under the no action alternative average annual water supply would average 4.7 million AF.  If DWR’s estimates of water supply with the BDCP are correct, then the BDCP yields no extra water under the High Delta Outflow scenario and 0.9 million AF under the Low Delta Outflow scenario.

I foresee a healthy debate over the “no tunnel alternative” scenario.  I will not choose among them in this post.

I focus on the implications of the No Tunnel Scenario on the Cost of BDCP Water.  To that end, I show how the annualized cost of BDCP water varies with the incremental yield of water supplies (see table).

Note: Cost estimates adjust DWR’s estimates for the understatement of capital costs and difference between the timing of capital commitments and start of deliveries.

Use your own expectation about the future with and without the tunnels.  Go down the first column until you reach your estimate of the average annual (incremental) yield of the tunnels.  Go across the row for the annualized cost estimate that is consistent with your risk assessment of the BDCP.  If you believe that the project risk (other than hydrology) is as sound as a U.S. Treasury note or bond, then stop at the estimate for the risk premium of 0% (this is the assumption of DWR’s analysis).  Keep going if you think that there are project risks.  As I said in my earlier post on the cost of BDCP water, if the relevant risk premium exceeds 2%, you are probably better off stop thinking about the tunnels and focus on the world without tunnels.

As shown by the table, expectations that average annual water supplies are even a bit higher than DWR’s no BDCP scenario yields a significant increase in the cost of BDCP water.  For example, if someone believes that the correct “no tunnel baseline” will yield 0.5 million AF higher average annual supplies than estimated by DWR, then the cost of BDCP water yield (with a 200 basis points risk premium) would be about $1,000/AF under the most favorable (Low) Delta Outflow scenario, and about $1,700/AF under the less favorable (High) Delta Outflow scenario.

As with any long-term investment project, expectations about the future are critical for project assessment.  There are no guarantees.  We can only identify the reasonable range and (possibly) likelihood of future outcomes.  To paraphrase a congressional leader on another issue, “we will need to build the tunnels to find out the outcome.”  Whether California follows that advice depends on how a consensus emerges about “rolling the dice” on alternative views about the no tunnel scenario.

For Hydrowonk, I’m concluding (as of today) that the cost of BDCP water will cost in excess of $1,000/AF (inflation adjusted).  Since this is a non-firm supply of untreated water in the Delta, I urge all parties wishing to acquire non-firm supplies at these prices to contact me immediately.  I’m sure that my firm can help meet your water needs well in advance of 2025.