In Rod Smith’s post on April 2nd, he predicts that the final 2014 allocation from the State Water Project will be 23%, with “a reasonable chance that the final SWP allocation will be zero.” Although the rains in February were kind to California’s most-parched areas, the major storm did not help much towards reversing the severe drought conditions that the Central Valley farming areas face. However, in the Southeastern portion of the state along the Colorado River, the water crisis seems much less dire. For now, the Colorado River has given Arizona and the portions of California that have access to it water supplies without interruption – a marked contrast to the areas of California that rely on the State Water Project. But why is this the case, and for how long can the Colorado supply water reliably? In this piece, I will address both of these issues.

To understand the disparity in water resources between the two regions of California, we must first understand how the state sates its thirst. As you can see from the graphics below, on average 70% of the precipitation in the state falls to the North of Sacramento. Unfortunately, the large urban centers and agricultural areas of the state (such as Los Angeles and the Central Valley) are far from these sources of water. A series of aqueducts and canals that make up the State and Central Valley Projects move on average 75% of the water collected from North of Sacramento to thirsty users in the South. These water supplies provide most of the water supplies for farmers throughout the Central Valley and the population of the greater Los Angeles area. However, parts of California rely on another important source of water: The Colorado River. 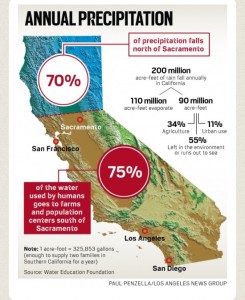 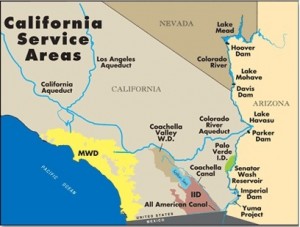 Both the State Water and Central Valley Projects rely on snowfall from the Sierra Nevada Mountains in Northern California for water supply. This has been one of the worst years of drought on record in the areas of California that provide water to the State Water Project. As the satellite pictures show, the Sierra Nevada Mountains have a stunning dearth of snow compared to one year ago. 2013 was by no means the rainiest year on record, and as such, California continues to draw down the limited water it has stored and drill more and more groundwater wells. 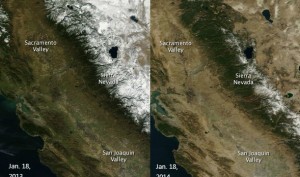 The Colorado River on the other hand receives most of its supply from a different area. The Upper Colorado River Basin experienced a slightly above-average snowfall this winter. Also, the Colorado River has two major storage facilities in Lake Mead and Lake Powell. So far, the Colorado has enough snowmelt and storage in place to provide enough water for its end users. So while farmers in the Central Valley dig deeper and deeper wells or buy water at sky-high prices from water banks, farmers along the Colorado River have not felt the pinch of the drought. A March 24th CNBC article estimates that the alfalfa crop grown along the Colorado River in the winter is worth about $2 billion annually. Have you eaten lettuce this winter? Chances are the lettuce you ate came from farms in this same region, because it is one of the only places in the country that can sustain this crop during the winter. 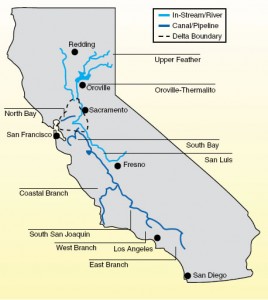 Meanwhile, in the Central Valley, the situation remains dire. In a March 29th article in the Inland Valley Daily Bulletin, Central Valley farmers are drilling wells at a torrid pace. In the first 45 days of 2014, Fresno County issued 124 well drilling permits and Tulare County issued 182 new well permits. The numbers of new well permits respectively are triple and double the pace of new well permits that the counties issued in 2013. There is no guarantee that these wells will be productive in the long-term.

Like the State Water Project, the water supply that the Central Arizona Project (CAP) relies on represents a junior claim to the Colorado River. The CAP will be one of the first projects along the Colorado River to experience cutbacks if the drought persists for a long period of time. The Arizona Department of Water Resources projects that if drought conditions persist over the next few years, the Central Arizona Project could experience water shortages by 2016 or 2017. The Arizona Capitol Times reports that the Central Arizona Project is working closely with the Arizona Water Bank Authority to beef up underground water storage. The authority stores water in underground aquifers when water is plentiful, and pulls the water back out of the ground during times of drought.

This is a sensible path forward, and one that California should focus on as well. When Governor Jerry Brown announced the $684 million drought relief package earlier this year, approximately $549 million of those funds will go to groundwater storage projects. However, new groundwater storage projects do absolutely no good in the midst of a drought. The projects must be in place before a rainy year to capture runoff. Both Rod Smith and I have advocated in a few articles for more water storage in the California water system. Hopefully when the next drought hits, our state will be better prepared.