Despite the fact that oil has long been nicknamed “black gold,” oil has been anything but gold as of late. Supply gluts in the United States and fighting among the OPEC countries caused a dramatic decline in crude oil prices over the last 6 months or so. As the chart below shows, crude oil prices have dropped from about $82 per barrel at the beginning of November to approximately $50 a barrel today. While US consumers enjoy lower prices at the pump, the significant drop in oil prices is causing major challenges in the industry. 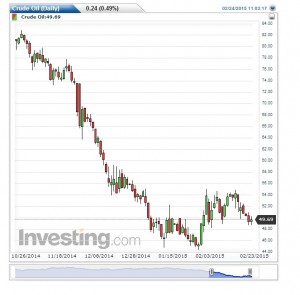 The decline in oil prices is creating problems in the world from Russia to Venezuela. Here in the United States, the effect on California’s oil industry is no exception. Last month, California Resources, a spin-off of Occidental Petroleum Corporation suspended its attempt to get approval from the Carson City Council (a city just outside of Los Angeles) to drill a new well field in the City. California Resources said that the project was “no longer practical in the current commodity environment” and provided no immediate indication whether it would pursue these plans again in the future.

While California Resources lamented over the challenging “current commodity environment,” environmental interests opposed to the project counted the cancellation of this project as a win. The Carson Coalition, a group of concerned citizens in the City expressed concerns that drilling techniques such as fracking could taint groundwater tables and cause degradation of water supplies in the City. This issue gained further momentum this month when the State of California admitted that it had made mistakes in allowing oil companies to use injection wells to get rid of fracking wastewater.

California faces a serious drought crisis that is in its fourth year. Every drop of water in the state is precious and we must do everything we can to be prudent with our water supplies. In this context, it is understandable that issues such as potential pollution from fracking can cause a stir among concerned citizens and environmental groups. In this piece, I will explore why California authorities missed the potential problems that might come from produced water injection wells and what new regulations might come out of this mix-up.

While California doesn’t often come to mind as a major energy-producing state, the US Energy Information Administration data shows that California ranks as the third-highest energy producing state in the nation, only lagging behind Texas and North Dakota in terms of production. Much of California’s oil reserves lie in the Monterey Shale, a formation that runs along a large part of the coast and the Central Valley. (Please see the map below.) While we often think of Los Angeles as a “concrete jungle,” you can see oil derricks in much of Los Angeles County, from the tony Beverly Hills to Long Beach. There are large oil fields also in the Central Valley in Kern County. 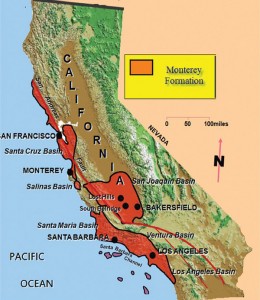 Some oil wells in the state use traditional drilling methods. As new technologies such as hydraulic fracturing became more prevalent, oil companies began to use these techniques in the Golden State. The Western States Petroleum Association determined that oil companies fracked 628 oil wells in 2011, and that trend likely continues today. So how does this tie into water? In two specific ways. First, wells in California extract water along with the oil. In some areas of the state, a well can pull up 13 barrels of water for every barrel of oil. Second, fracking uses a mix of water and chemicals to break fissures into the formation and release the oil. Both the water used during the drilling and the water that comes up during oil extraction needs proper treatment and disposal. But in new revelations from the California environmental authorities, the State has dropped the ball on the monitoring and oversight of this important issue.

Late last year, the California Department of Conservation received a letter from the US EPA outlining the “serious deficiencies” in California’s injection well monitoring program. The EPA letter followed a similar letter that the US EPA submitted in July, 2014. Specifically, these letters from the EPA alleged that most of the approximately 2,500 injection well permits the state issued were in violation of the US Clean Water Act. Not only were most of these permits issued after the Safe Drinking Water Act increased protections on aquifers for drinking water – but also 46% of these injection wells began operations within the last four years when Governor Jerry Brown pushed regulators to speed up the permitting process for new oil wells. The injection wells put produced water into non-exempt aquifers and aquifers that supply vital drinking and agricultural water supplies.

Earlier this month, the CA Department of Conservation admitted they made a mistake and blamed poor mapping and coordination between departments as reasons why they misinterpreted Clean Water Act regulations.  In a February 6th Associated Press article John Marshall, the Deputy Director of the CA Department of Conservation said for some permits, “We don’t know how this got approved.” In one case, he also mentioned that the Department issued a permit and the driller began injection well operations – only to have regulators rush to the site and shut down the operation immediately after they recognized their error.

There is good news and bad news related to this story. The good news is that of the affected aquifers the EPA has tested, none have shown obvious signs of contamination. The bad news is that getting the state back into compliance with the Clean Water Act will take time and significant effort. The CA Department of Conservation must stop injections into any aquifer that has Clean Water Act protections by 2017. How the state will achieve this goal by the deadline remains to be seen. While I certainly agree that the drilling companies have to follow the letter of the law as it relates to the Clean Water Act, the Department of Conservation erred when they allowed the injection well permits in the first place. The drilling companies will have to find alternative disposal methods and will very likely have to eat the cost of shutting down these operations.

If there is anything that we can learn from this blunder, it is that inter-agency coordination is vital to ensure the safety of our watersheds and aquifers. Could the state have avoided this issue if they made a phone call to the EPA prior to issuing these permits? Or if they had double-checked their maps? The answer is likely so. Second, and more importantly, the issue brings to light the importance of properly disposing of and using this produced water. In the midst of this historic drought, we need to use every drop of water we have efficiently. Some oilfields in Bakersfield already send treated produced water to farmers that need extra water during the dry years. The Bakersfield Californian points out that for many years Chevron has sent produced water from its oilfields to the Cawelo Water District. The district uses the supply for irrigation water. These types of programs should be encouraged. They will provide vital treatment of produced water to protect our aquifers and will allow us to use our water resources effectively and efficiently in this state. Hopefully this gaffe will bring further cooperation rather than fighting between the oil industry and regulators.