Two recent transactions in western water (San Diego County Water Authority’s Carlsbad Desalination Plant and San Antonio Water System’s Vista Ridge Project) provide an opportunity to discuss the economics of the structure of debt and equity payments to project developers.  For long-lived projects, a finance plan that matches the term of debt structure to the project’s life, makes both debt and equity payments subject to inflationary adjustments and deferred payments at the end of the payment period provides the best economic incentives for:

Plans that don’t incorporate these features will shift the economic burden of project costs to current customers relative to future customers, erode the economic incentives for customers to conserve water long-term and dilute the economic cost of project operators defaulting on contractual obligations.

The Carlsbad and Vista Ridge projects involve public-private partnerships where project developers design, build, operate and finance the project for their municipal customer.  Key aspects of the financial structure of these projects include term of the agreement, term of debt, pricing components for project debt and equity, early buyout provision, and economic penalties for default by project operators and (see table).

Common features include matching the term of debt to the term of the agreement, early buy-out provisions and penalty for project default.  The pricing components for debt and equity charges differ.  San Diego County Water Authority structured their charges to increase at an annual rate of 2.5%.  San Antonio Water System, instead, choose a fixed annual charge.

Matching the term of debt and equity return to the term of agreement means that the capital investment of these projects is fully repaid within 30 years.  The municipal water user has the right to acquire the project after 30 years for $1 in the case of the Carlsbad Project and for no further consideration in the case of the Vista Ridge Project.  Both projects involve longer-lived assets.  Therefore, provided that they are properly maintained (a contractual obligation of the project developer), these projects are anticipated to provide water service after ownership transfers to the municipal water user.  Customers for the first 30 years of project operations will pay the cost of capital investment and customers thereafter will not.

In a world of water conservation, the decline in project costs (which will drive a municipality’s water rates) means that water rates will decline after the transfer of ownership.  This distorts the long-term incentive for water conservation.  Further, current water customers shoulder 100% of the cost burden of capital investment for the benefit of water customers after the transfer of ownership.  I leave for others the political analysis.

The fixed versus escalating debt and equity charges also has significant economic implications.  Assuming a long-term rate of inflation of 2.5%, the real (inflation-adjusted) value of a fixed charge will be 22% lower within 10 years, 39% lower within 20 years and 52% lower by 30 years.  Again, with real costs declining from the start, the incentive for water conservation will erode over time.  Further, for the project developer, the economic cost of project default is also eroded by inflation.

In effect, San Diego’s structuring of its debt and equity charges to grow at 2.5% means that the real value of its debt and equity charges remain unchanged (if actual inflation follows the long-term average).  In comparison to a fixed charge without escalation, San Diego shores up the long-term economic incentive for water conservation.  Further, San Diego assures that the economic cost of a project developer’s default is not eroded by inflation.

Most water users face the prospect of new projects that yield water at costs substantially higher than their current sources of water supply.  As projects are undertaken to meet growing demands, increased supply reliability, sustainability and other objectives, it would be prudent to communicate the economic costs through permanent increases in water rates, rather than a structure where, long-term, the economic incentives for water conservation are diminishing and eventually go away.

I use the following example to illustrate the nature of the issues and their solution: 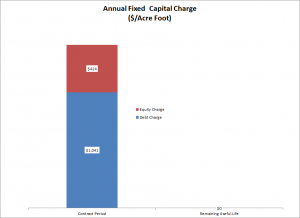 Inflation, of course, will erode the real economic value of these capital charges (see chart). Inflation reduces the real value of the capital charges, whether capital is repaid over 30 years or 50 years. Extending the recovery of capital charges over the useful life of the project at least provides some incentive for water conservation after ownership transfer. 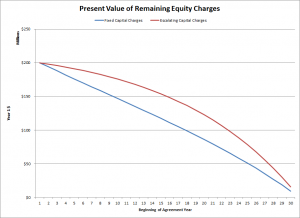 In sum, for any year during the agreement, the project developer has more “skin in the game” to avoid default under financially-equivalent escalating equity charges than fixed equity charges.

How can one structure financing of a 30-year agreement for a 50-year project and avoid capital charges falling after ownership transfer, maintain the economic incentive for water conservation and provide meaningful economic incentives for project developers to meet their contractual obligations?

The key involves structuring “balloon” payments at the end of the agreement for both debt and equity. Corporate debt, for example, often involves the issuance of “interest only” payments during the term with a balloon payment equal to the amount borrowed. When the debt comes due, the corporation “rolls over” the debt through new debt issuance.

Since a water project has a defined life, 50 years in this example, one does want not to finance with “interest only” debt.  A portion of the debt should be repaid during the first, 30-year debt issuance.  The balance paid by subsequent rollover financings.  In this example, I assume that there is a 20-year subsequent financing of the debt left unpaid by the first financing.

A solution is to issue inflation-adjusted debt and structure equity charges. The payment structure could span the useful life of the project. For a debt issuance of 30-years, the unpaid principle would be “rolled over” into a subsequent financing that would repaid over the remaining useful life of the project.   If the municipal water user wants to buy out the project developer after 30 years, they pay an acquisition fee equal to the present value of the remaining equity charges year 31 through 50. Under this example, almost $600 million of debt is retired through the first debt financing, the balance of the $800 million debt obligation retired through the second debt financing, and the equity buy-out at the end of the 30th year is $156 million (Year 1$)—see table. 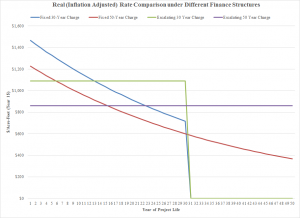 Before offering comparisons, all these rate structures are financially-equivalent (they yield the same present value–$800 million for debt payments and $200 million for equity returns).  They differ in terms of their dynamics in pricing. 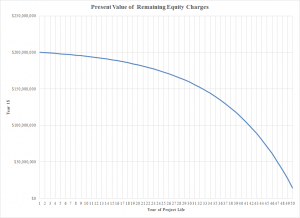 How would the municipality pay for this acquisition?  By maintaining the pricing structure post-acquisition, the municipality has an inflation protected income stream from the remaining equity charges.  This payment stream could finance issuance of securities to finance the acquisition.

Financial structure should reflect the economics of projects, not distort them.  Long-term projects supported by long-term charges provides superior economic incentives than project that do not.  For long-lived projects, the tendency to structure debt charges to reflect the term of debt and structure equity charges (on a level basis) for the term of a project agreement distorts the economics of the project.  The economic incentives for water conservation are eroded by inflation or payout periods shorter than project life.  The economic costs of project default are also weakened.

Instead, a financial plan should envision a succession of debt issues with rollover of a portion of previous debt and structured equity charges that has a significant back-end of payments to project developers to reward contractual performance.  By making both debt and equity payments subject to inflationary adjustments, the project’s rate structure can successfully communicate long-term project costs to customers and economic incentives for meeting contractual obligations by developers.