In my last post, I wrote about how long-suffering California is having a good start to the water year as weather patterns have changed and so far, ample rainfall has fallen across the Golden State. A series of powerful storms this weekend and continuing this week has already caused flooding and widespread damage across parts of California. In Sacramento, Monday marked the first time in ten years that officials opened the Sacramento Weir to divert floodwaters to the Yolo Bypass and prevent further damage downstream. Strong winds also toppled the iconic Pioneer Cabin Tree, a hollowed-out sequoia large enough for cars to drive through. Further “atmospheric river” storms are expected to hit across the state as the week continues.

The rains have been a boon for the state’s reservoirs. According to the California Data Exchange Center, six reservoirs including Lakes Shasta and Oroville (the two largest reservoirs in the state) are at more than100% of historical capacity for this date (see graphic below). As I mentioned in my last post, reservoirs, including Millerton, Don Pedro and Folsom Lake, had to release water out from behind the dams to ensure enough room for future flood flows. It will be interesting to see if further land mass in California is declared drought free when the US Drought Monitor releases its statistics later this week. 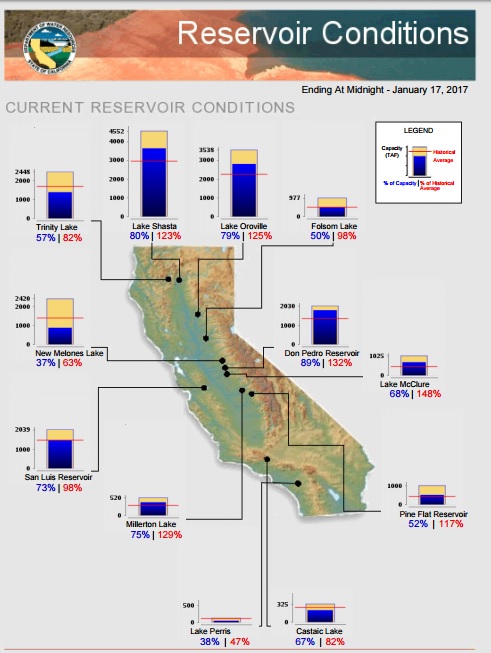 Unfortunately for other parts of the country, the winter has caused some areas to return to drought conditions. Currently, the Oceanic Niño Index (ONI) is showing weak La Niña conditions. The weather pattern typically brings wetter conditions across the Pacific Northwest, and drier conditions across much of the south. Some of the hardest-hit areas of drought are in the southeast, including parts of Georgia, Alabama, Tennessee and the Carolinas. Further west, the States of Oklahoma and Kansas are falling back into drought conditions after rains from last winter alleviated much of the drought. How is the drought affecting the economies of these states? Will there be any relief to the current drought conditions these two states face? I will address both of these issues in this post.

Oklahoma – In, out, and back in to Drought Conditions

The State of Oklahoma cannot seem to shake drought conditions for very long. For the last five years, Oklahoma’s drought rivaled the severity of California’s. At the peak of the drought in October 2011, 69.82% of the state faced exceptional drought conditions. In comparison, at the height of California’s drought in October 2014, 58.41% of the state had exceptional drought conditions. In May 2015, a series of flood events that caused millions of dollars of damage and unfortunately killed 31 people in Oklahoma and Texas also alleviated the drought. By July 2015, the US Drought Monitor declared Oklahoma “drought free,” but the moniker was short-lived. As 2015 turned into 2016, the same weather patterns that caused the exceptional drought in the southeast also dried out Oklahoma. Currently, 94.39% of the state faces some kind of drought and extreme drought is showing up again in parts of the southeastern part of the state. 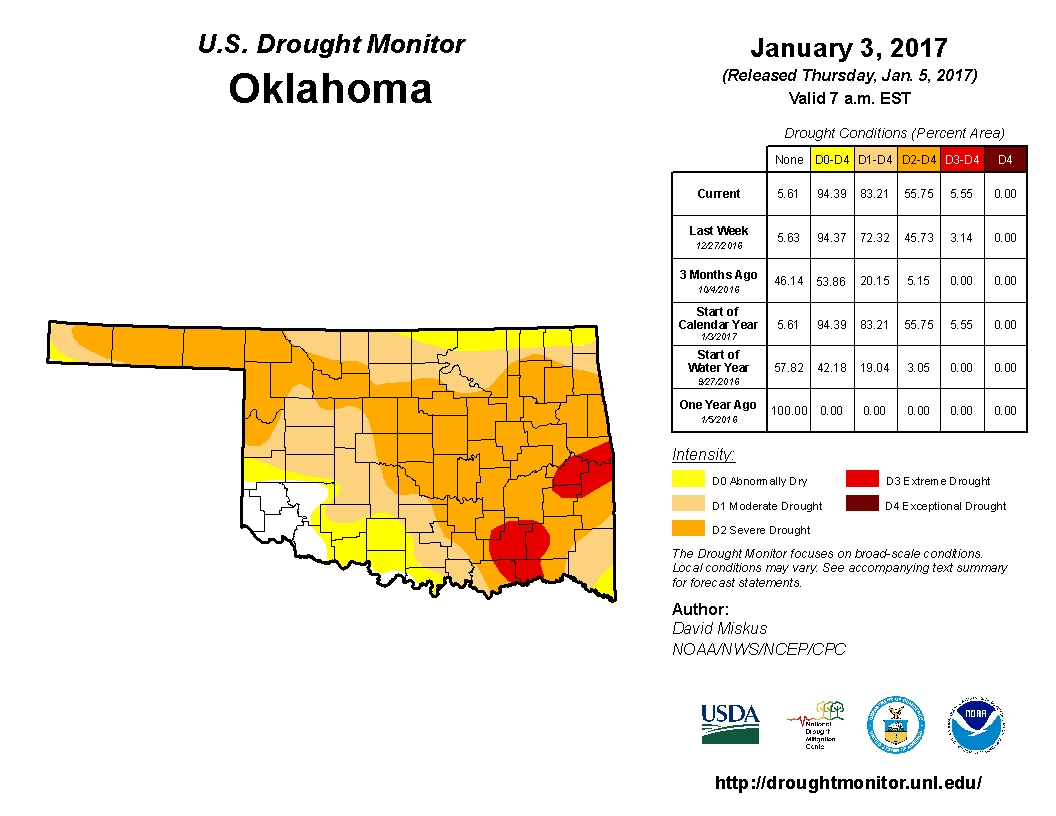 Droughts hit Oklahoma’s agricultural industry especially hard because unlike California’s farms, only a small percentage of Oklahoma’s farmland is irrigated. Oklahoma State University’s Farm Ranch and Irrigation Survey determined that Oklahoma had 1,672 farms with access to irrigation, with these farms totaling approximately 2.5 million acres. However, only 426,602 acres on these farms were irrigated. This figure compares to the 8,336,000 total acres that the Oklahoma Department of Agriculture, Food and Forestry estimate were dedicated to agriculture in 2015. During the last extreme drought in 2011 and 2012, an economic impact report again from Oklahoma State University estimated that the ag industry suffered approximately $2 billion in economic losses.

The state currently can ill-afford another drop in economic productivity and the resulting decrease in tax revenues for the state. Business Insider reports that state officials are projecting an $868 million state budget deficit next year, and the state is still recovering fiscally from the $1.3 billion deficit it suffered in 2014. The collapse in oil prices contributed most heavily to the decline in state revenues. However, a sustained drought could have an effect on the agriculture industry and an already fragile state budget situation. 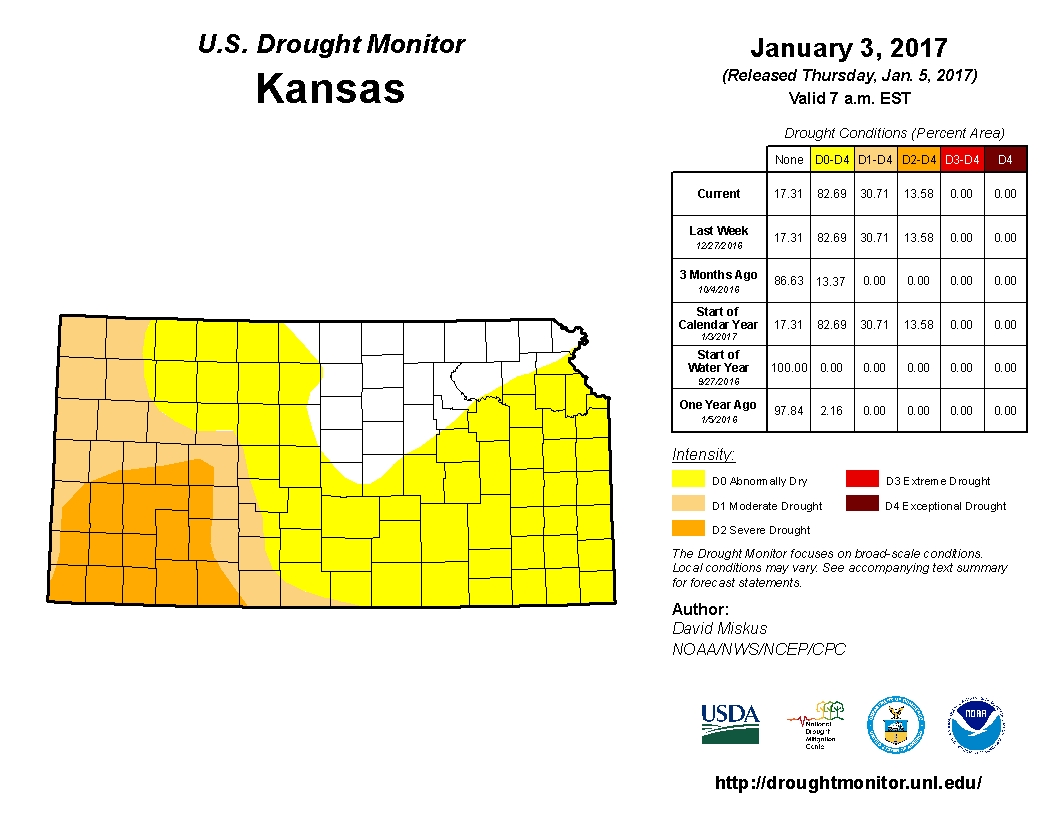 The current drought conditions for Kansas show that while only 13.58% of the state’s land mass has severe drought, (mostly in the southwestern portion of the state) 82.69% of the state is either abnormally dry or worse. What is more concerning to state officials is that the current weather patterns are similar to the atmospheric conditions that were in place in 2012, when the drought hit its peak. Meteorologists are looking particularly to the drought conditions in the Oklahoma-Texas area for clues as to what will happen in Kansas. Mary Knapp, a climatologist at Kansas State University said, “If it stays dry to our south, we will end up with, again, that blocking high that will choke off any moisture into our area.”

Farmers remain concerned about the 2017 season as well. Current crop conditions vary by region. Romulo Lollato with Kansas State’s Department of Agronomy said, “The western region has had a pretty rough start, and just about everyone is needing some precipitation. [But] in some cases we’re seeing some pretty lush growth to the crop, particularly in the central corridor. We have very contrasting conditions statewide.” The lack of water in combination with some cases of disease have negatively affected the start of the winter wheat crop in the state.

Is drought the “New Normal” in the Great Plains?

In the last decade, the Great Plains have seen their fair share of drought. Kansas for example has not had a multi-month stretch of completely drought-free conditions since the middle of 2010. Both Kansas and Oklahoma had periods of drought that rivaled the severity of California’s worst drought conditions in the last five years. Kansas has a history of facing challenging farming conditions, going all the way back to the “dust bowl” conditions of the late 1920s and 30s. Today, farmers must face another reality that did not affect farmers during the Great Depression: climate change. As we saw in California for the last few winters, atmospheric conditions can cause storms to steer away from a region, creating little precipitation during the time of the year with the highest probability for rainfall. Atmospheric conditions, particularly those related to the lingering effects of La Niña will continue to influence the Great Plains’ weather patterns. For now, we can hope that Mother Nature will provide the region with some rainfall. But for the future, all areas of the United States must be prepared for the potential effects that more severe drought and flooding cycles will have on the economy and environment, and plan accordingly.