Plans have implicit, often unrecognized “bets on the future.”  Putting strategic into planning means thinking critically about fundamental assumptions and asking what the potential is for the future to look differently than the past.  The recent history of the Colorado River water is “Exhibit A” for the need to put strategic into planning.  (Hydrowonk is aware of other instances throughout the west but focuses on the Colorado River.)

Arizona started storing Colorado River water in the mid-1990s in anticipation of future shortages on the Colorado River.  This ultimately led to a California 4.4 Plan to meet its obligation under the 1928 California Limitation Act (passed by the California Legislature as a condition to passage of the federal Boulder Canyon Project Act authorizing the construction of Hoover Dam).  During this period, few agencies changed how they addressed the availability of Colorado River water to California; although the Imperial Irrigation District and the San Diego County Water Authority were exceptions.

The negotiations of the QSA proceeded under the presumption of the availability of surplus water.  (Hydrowonk has first-hand knowledge, representing the Imperial Irrigation District at the time.)  This presumption was based on modeling using the entire historical 20th century record of the natural flow of the Colorado River.

From today’s perspective, the idea of surplus Colorado River water is quaint.  Nevertheless, it took at least a decade for formal planning to catch up with the reality on the ground.  Going forward, one hopes that today’s planning thinks more critically about its underlying assumptions than our predecessors.

While often neglected, risk assessment is an integral component of prudent decision-making.  Rather than “hardline” specific expectations about the future in cement, think about the variability in future conditions and embrace risk management.  (See Rethinking California’s Water Industry: Part 2—Think Risk Management Not Reliability of State and Federal Projects).

The water industry has made progress over the past quarter of century, especially in terms of considering hydrologic risk.  Techno Nerd Alert: From a technical perspective, studies of hydrologic risk are moving away from the “sequential index method” (where it is assumed that the sequence of future hydrologic conditions follows the order of past hydrologic conditions under alternative assumptions about which historic year next year will replicate) towards Monte Carlo studies (where the sequence of future hydrologic conditions need not follow the past, but instead follow realizations from underlying statistical processes).  What the ****?  The latter method entertains the possibility that the future may be more extreme than the past (more below).

There is room for continued improvement.  Consider once again the Colorado River (see figure).  Have we been in a prolonged drought, or are the unusually wet hydrologic conditions in the early 20th century is giving way to the long-term average calculated by tree-ring studies?  Under the former belief, the last decade was a drought.  Under the latter belief, a drought in the first decade of the 21st century was broken by the year 2011.  Since then, we have been experiencing the “long-term” new normal.  The nature of the risks we are managing depends on which world we are inhabiting. 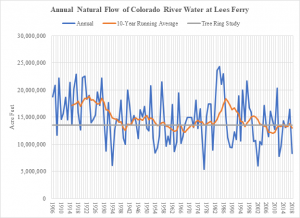 As discussed in Part II of the COVID-19 posts, the water industry should enter an era of predicting, testing and learning.  Solving “the riddle” of Colorado River hydrology would inform strategic planning.

Risk assessment must expand beyond assessment of water availability.  Planning studies, for example, focus on the implications of water conservation.  Per capita water use is generally on a declining trend.  Most studies, however, do not explicitly focus on the impact of higher water rates.  Hydrowonk conducted a comprehensive economic study of Southern California’s wholesale water demands a few years ago.  With water rates increasing faster than inflation for many decades, water sales were 60% below the level that they would have been if water rates had only increased as fast as inflation.

A Black Swan is a highly improbable event that is unpredictable (nothing in the past can convincingly point to its possibility), has an extreme impact, and human nature makes us concoct explanations for its occurrence after the fact.  “Black Swan logic” makes what you don’t know (or don’t think about) more relevant than what you do know.  For those with a curious and hardy mind, Hydrowonk recommends “The Black Swan: The Impact of the Highly Improbable,” by Nassim Nicholas Taleb (Random House, 2007).  Mr. Taleb argues history is a succession of Black Swans.

What does this mean for the water industry?  Humility.  Our industry is based on long-term plans and projections with little consideration of uncertainty and what we don’t know.  If our assumptions about future conditions prove accurate, our world is orderly.  When not, then what?

The industry should revisit its traditional reliance on projects with high fixed costs and revenue structures based on the inevitability of water demand.  We need to increase our resiliency to address our challenges.  There are many questions:

COVID-19 has posed a generational challenge in terms of public health and the economy.  Our “new normal” is currently unknown.  The water industry’s agenda has been expanded to addressing the economic consequences of the virus and how we think about the environment and the future economy.  Nicholas Taleb is correct.  Black Swans make history.  Learn what we can from the experience and start thinking about the future differently than we have in the past.