Over two years ago, a Los Angeles Times Editorial stated: “The Salton Sea is a disaster in the making. California isn’t doing anything about it.”

The State of California has finally commissioned this summer (2021) a review of proposals submitted over three years earlier (March 2018). What is the state’s schedule for addressing the rapidly deteriorating conditions at the Salton Sea? The current plan is for the review to be completed by December 2022. And then?

The facts are clear: the rapid decline in Salton Sea’s elevation is accelerating. Continued delay will only mean that the dimension of the challenge in five years, ten years or longer will be substantially greater than the challenge today.

What are the dynamics of the Salton Sea’s elevation?

As reported in a previous post, the long-term, sustained decline of the Salton Sea is a conundrum. Under the terms of the historic long-term water conservation and transfer agreement between the Imperial Irrigation District and the San Diego County Water Authority, the impact of the transfer through 2017 was fully mitigated. So, what other forces are at work? 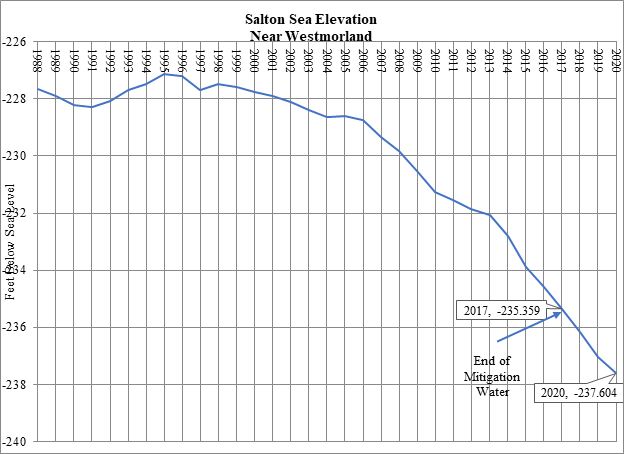 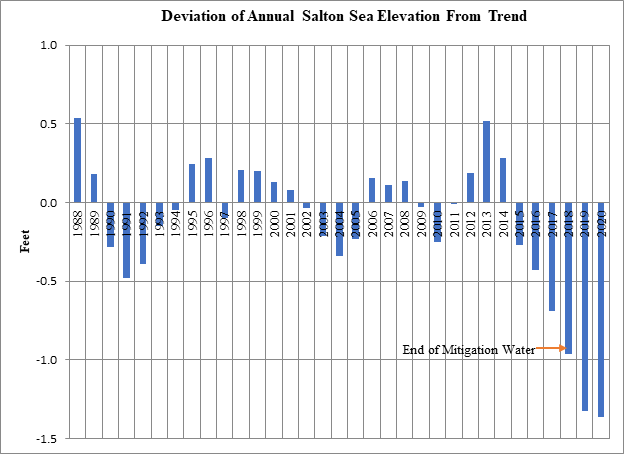 Does this signal an acceleration in the decline of the Salton Sea’s elevation with the termination of mitigation water delivered to the Salton Sea? From a statistical perspective, a new trend cannot be confirmed with a few data points, although the run of six years of deviations below trend with an acceleration of declines after the delivery of mitigation water ended may be “some type of signal.” Continued state inaction should eventually provide enough data to support a statistically robust estimate.

In the meantime, public health costs accumulate and environmental collapse marches on.